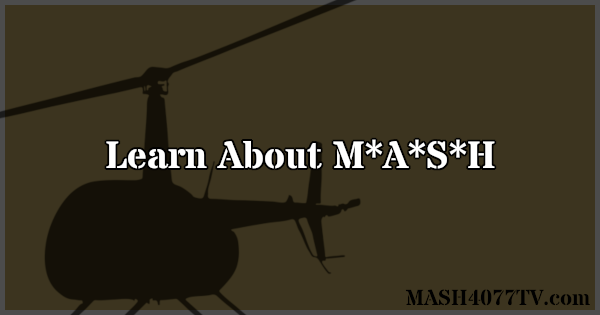 Learn about the history of M*A*S*H and explore a variety of topics, ranging from TV Guide ads to the anatomy of a M*A*S*H script.

Watch the original CBS fall preview for M*A*S*H, not seen since 1972.

Anatomy of a M*A*S*H Script

Learn about what goes into a M*A*S*H script, with scans and commentary from fan Eric White.

An illustrated guide to the 4077th compound, including some of the lesser known locales: the camp library, the x-ray room, and more.

Comparison of “Our Finest Hour” on VHS and DVD

“Our Finest Hour” was released on DVD as two half-hour syndicated episodes. Columbia House released the episode in its original form. A comparison of the two versions, with a list of cut scenes, is included.

What was it like watching “Goodbye, Farewell and Amen” when it was first broadcast? What sort of commercials and promotional spots were included? Thanks to fan Larry Petit, you can find out by reading this article.

Wayne Rogers hosted this 12-hour marathon on January 1st, 2007 for The Hallmark Channel, featuring twenty episodes from the first three seasons. View a selection of his introductions.

Jamie Farr hosted this 12-hour marathon on May 28th, 2007 for The Hallmark Channel, featuring twenty episodes from the series. View all of his introductions as well as a final farewell to viewers.

A list of historical inaccuracies in M*A*S*H, including comic books and movies shown or referenced before they were produced.

Quite a few television specials about M*A*S*H have been produced over the years, beginning with “Making M*A*S*H” in 1981. Read all about them.

The long-running, popular game show Jeopardy! has occasionally included clues about M*A*S*H. How many can you get answer?

M*A*S*H has been mentioned in episodes of countless television programs, ranging from blink-or-you’ll-miss-it references or lengthy conversations or parodies. If you’re watching television and someone mentions Hawkeye or Radar, be sure to see if it is listed here and, if not, send it in.

M*A*S*H was on the air almost four times longer than the actual Korean War (1950-1953). Understandably, there’s no way to cram 11 years worth of episodes into three years of war. That hasn’t stopped fans from noting the dates mentioned in various episodes and trying to figure out how they fit together.

A selection of vintage advertisements for M*A*S*H from TV Guide magazine.

There are moments from M*A*S*H that every viewer remembers. Other moments are cherished memories to individual viewers for a variety of reason. Do you have a memorable moment?

Each and every fan of M*A*S*H had to start by watching one episode of the series. So everyone has their own “My First M*A*S*H” story. What’s yours?

A collection of rare promotional material used to publicize the premiere of M*A*S*H way back in September of 1972.

Reviews of the Pilot

A selection of contemporary reviews of the premiere episode of M*A*S*H.

An in-depth look at the 1982 line of action figures and other collectibles from Tristar International, written by M*A*S*H fan Peter Kurch.

A look at the way M*A*S*H was originally broadcast in the 1970s, with rare footage of sponsorship promos and more.

Where Are They Now?

McLean Stevenson, Larry Linville, Harry Morgan, Wayne Rogers, William Christopher, and David Ogden Stiers have sadly passed away. The rest of the M*A*S*H cast are still with us. See what they have been up to since the series came to an end.