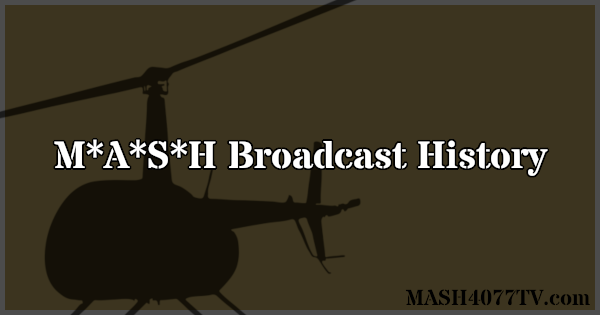 The following broadcast history for M*A*S*H includes every single original CBS broadcast, every repeat, and every time the network pre-empted the series for some other programming during its 1972-1983 run. Browse through the list of episodes and you’ll be able to track how often the series changed time slots. During some seasons it aired in only one time slot while other seasons it moved around quite a bit.

Please note that this history has been drawn from a variety of printed sources, primarily newspapers, and may not reflect changes CBS made to its schedule at the last minute. Therefore, it is possible that there may be inaccuracies, particularly when it comes to repeats.

Note: Repeats from Season 8 continued to air through November 1980 due to a SAG/AFTRA strike that lasted from July to October, delaying the start of the 1980-1981 season by several months.

The final, regularly scheduled prime-time broadcast of M*A*S*H on CBS was a repeat of “Goodbye, Farewell and Amen” on Monday, September 19th, 1983.