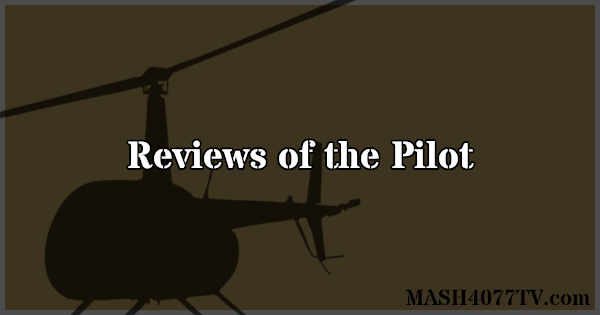 Here are a selection of reviews for “M*A*S*H – The Pilot,” including one published months before the series debuted. Most are positive, some worry about the show’s time slot (during its first season, the series was broadcast from 8-8:30PM ET on Sunday nights) and a few are negative. Unless otherwise noted, all excerpts were published in the September 25th, 1972 edition of Broadcasting magazine [1].

“If you saw the movie version of M*A*S*H, you are doubtedly wondering just how badly its off-hand sexuality and bloody black humor fared when confronted with television’s ‘this is going into living rooms all over the nation’ approach to program content.

I can report that it did not fare badly at all, at least not as badly as you might imagine. The sexual candor is toned down, but it has not been banished; and the operating tent humor is still there tho, if my memory serves me, it is not quite so blood red.

But don’t worry about them getting carried away. The sex stops at suggestiveness and a lot of hugging and kissing. When one of the male stars surprises a lovely nurse in shower, he has his eyes closed and faces away from her.

Still, the program’s slotting–it’s scheduled to be shown here at 7 p.m. on Sundays–does seems [sic] a big questionable. Not that the show examines any large amounts material [sic] that is obviously objectionable in such an early evening show, but it is bound to bring down the rath [sic] of those who feel that Sunday evening television should be as pure as the driven snow. M*A*S*H certainly isn’t that pure.

As for the bloody humor, it certainly doesn’t hold a candle to some of TV’s bread and butter westerns and cops and robbers shows in terms of making death an almost trivial event.

But the sexual suggestiveness, tho it is probably some sort of high-water mark for a television comedy series, and the funny lines tossed about by doctors who are up to their elbows in some soldier’s spleen will not by themselves make M*A*S*H a hit.

What I think you will like is the cast, and particularly the supporting players.

Alan Alda and Wayne Rogers are reasonably successful in filling the starring roles of ‘Hawkeye’ Pierce and Trapper John McIntyre that were created so well in the film by Donald Sutherland and Elliot Gould. What promises to make the show a popular one are the zany characters who surround them, including Larry Linville as Maj. Frank Burns and Loretta Switt [sic] as Maj. Margaret ‘Hot Lips’ Houlihan.

Particularly delightful, at least in the pilot, were McLean Stevenson and Gary Burghoff, as Lt. Col. Blake, the base commander, and his orderly, who anticipates Blake’s every thought. Theirs is the kind of comedy situation that might wear thin after a few shows, but in the short run it is a lot of fun.

The pilot’s plot is a rather poor effort in which Alda and Rogers throw a party and raffle [the winner gets a weekend pass to Tokyo with the most desirable nurse on the base] in order to raise the funds necessary to send their Korean houseboy to school in the States. They are saved from a court martial by their abilities as surgeons, and it all seemed to much like the Hollywood never-never-land story lines that doom so many of television’s comedic attempts.

Fortunately for all concerned, and particularly for you who will be watching it in fall, the plot seems unimportant. It is the fun of getting there, whatever silly place that might be, that promises t be the series’ strong suit.”
J. N., Chicago Tribune – June 15th, 1972 [2]

“They do not expose any naked nurses in the show nor do they spread the bloody innards of the wounded out on the operating table, but the TV version of M*A*S*H still bends the proprieties of television almost to the breaking point.

Hawkeye Pierce [Alan Alda] and Trapper John McIntyre [Wayne Rogers] are as rowdy, lecherous, and disrespectful of authority as they were in the movie. Hot Lips Houlihan [Loretta Swit] and Maj. Frank Burns [Larry Linville] are as blatantly hypocritical about sex. Lt. Col. Henry Blake [McLean Stevenson] has the same trouble keeping the inmates of the 4077th Mobile Army Surgical Hospital from ‘ruining this war.’

Without the blood and gore, you do not get the same sense of horror that made the film for so many who saw it an anti-war polemic. The operating tent sequences here are filmed in red, but that isn’t the same as focusing the camera down into the wound.

As a wild and wooly satire on army life, however, M*A*S*H will delight anyone who has spent even eight weeks in basic training let alone fought in the war. Hawkeye and Trapper John may not answer the classic question, “How do you get out of this chicken outfit?,” but they are experts at plucking all the feathers.”
Clarence Petersen, Chicago Tribune – September 18th, 1972 [3]

“Like the movie ‘MASH’ and the novel ‘MASH,’ the TV MASH takes a very irreverent attitude toward war. It’s refreshing on a medium that usually takes its war very seriously whether fact or fiction.

The series is obviously less bloody and bawdy than the movie, but it’s bloodier and bawdier than any other TV comedy. At least in the opening session of the series Sunday (on Channel 2 at 8).

In the opening script written by producer Larry Gelbart and directed by executive producer Gene Reynolds, the surgeons, Hawkeye (Alan Alda) and Trapper John (Wayne Rogers) hold an auction to raise money to see their Korean houseboy (Patrick Adiarte) to the states to medical school. The prize: a nurse, Lt. Dish (Karen Phillip). Auctioning off weekends with army nurses is not exactly proper military procedure to the army. Nor, for that matter, to Lt. Dish.

How well this sort of thing will go over on Sunday nights at 8 is difficult to say. I wish the show were on at a later hour or a different night. That’s kiddie time–Disneytime. Networks get very nervous about Sunday night. Even CBS.

I was a great admirer of Bob Altman’s movie “MASH” but I don’t think Reynolds and Gelbart have anything to apologize for in the transference to TV. Not the cast, certainly. Alda and Roger are splendid. So is McLean Stevenson as their addle-pated colonel and Gary Berghoff [sic] as his incredible perceptive dogrobber. Loretta Swit as Hot Lips, Larry Linville as the suspicious Maj. Burns, G. Wood as Gen. Hammond–it’s quite a crew. No wonder we didn’t win the Korean War.”
Cecil Smith, Los Angeles Times – September 18th, 1972 [4]

“From any angle, ‘M*A*S*H’ is this season’s most interesting new entry. Set in ‘Korea, 1950, a hundred years ago,’ the series has been ‘developed for TV’ by Larry Gelbart from the novel and Robert Altman film of the same name. Using dazzling editing techniques, Mr. Altman managed to achieve a balance between insane humor and gruesome war that was thought horrifyingly funny many, thoroughly objectionable by some.

Using the premises, however, that black or absurd humor performs a legitimate function, in this case pushing personal existence to the limits of absurdity to cope with the absurdity of war, the real issue centers on the artistic persuasiveness and integrity of the TV series.

The first episode, written by Mr. Gelbart and directed by Gene Reynolds,who is producing the series also, met the demands of this issue with surprising effectiveness. Brightly paced, it introduced its stable of wacky combat surgeons in a plot to raise money to send a Korean houseboy-martini mixer to medical school (“America has sent thousands of boys to Korea; the least we can do is send one Korean by to America”).

For television, the editing was refreshingly brisk and the humor unusually adult. Tomorrow evening, however, the second episode, written by Burt Styler and directed by Michael O’Herlihy, the pacing and the comedy show distinct signs of slackening. Revolving around the routines of a Korean blackmarketeer, the story degenerates into standard situation-comedy skits.

‘M*A*S*H’ could be a major innovation for television. Or it could slip quietly into the category of ‘Hogan’s Heroes.”
John J. O’Connor, The New York Times – September 23rd, 1972 [5]

“…might just make it, too. It may have trouble in its time slot, but if so it’ll be moved fast. It’ll be fun.”
Bob Foster, San Mateo Times

“Has a much better chance of surviving because it is an irreverent, offbeat situation comedy which projects a contemporary, adult points of view … of the new season’s harvest of shows it is by far the best.”
Kay Gardella, New York Daily News

“While we still have the ghastly Vietnam war with us, a comedy perspective on repairing bodies during the Korean war just doesn’t register immediately as humorous. A sardonic movie does not always make a TV series hit.”
Bob Williams, New York Post

“The laughs are there but with the compression into a half hour the shifts of mood and tone are often too abrupt.”
Don Freeman, San Diego Union

“It is basically Hogan’s Heroes out of POW camp, in surgery and in another war. No amount of sophomoric naughtiness could change that inescapable finding. The Hawkeye and Trapper John characters were so overwhelmingly fun-loving, so unceasingly wise-guyish and, yes, so generally obnoxious that I almost found myself rooting for Larry Linville’s officious executive officer.”
Tony Lacamera, Boston Herald-Traveler-Record American

“Once the initial nausea is overcome … it is hilarious.”
Terence O’Flaherty, San Francisco Chronicle

“… a surprisingly well-done retread job and I hope Gelbart and Reynolds can keep it going in such good style.”
Will Jones, Minneapolis Tribune

“With the canned laughter toned down, I thought the show came off rather well, although the introduction of so many characters in the opening may be puzzling to the people who did not see the film on which the series was based.”
Ed Swinney, Houston Post

2 Replies to “Reviews of the Pilot”