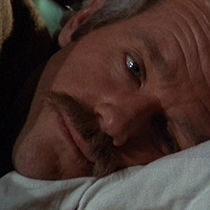 Capsule Summary: Margaret tries to help one of her nurses, an old friend, who has a drinking problem. Meanwhile, Hawkeye is ostracized after he pulls a prank on Charles.

This isn’t the first episode of M*A*S*H to address alcoholism–“Alcoholics Unanimous” from Season 3, “Fallen Idol” from Season 6, and “Bottle Fatigue” from Season 8–but is perhaps the most dramatic attempt to spotlight the darker side of imbibing too heavily. Unfortunately, the story line falls flat for me because the stakes are too low. Like so many other episodes, it focuses on a one-off characters viewers have never seen before and therefore don’t care about.

The episode tries to force a connection by making Captain Helen Whitfield an old friend of Margaret. There’s also a weak explanation for why she hasn’t been seen before: she only been at the 4077th for two months and will be leaving in two weeks. It’s not enough for me. Imagine the impact if one of the recurring nurses–like Kellye or Shari or Bigelow–developed a drinking problem. It still might feel forced, particularly if it came out of nowhere, but at least viewers might care more.

It doesn’t help that Whitfield’s drinking problem isn’t given time to develop. We’re introduced to her, she makes a mistakes in the O.R, and then Klinger finds her drinking alone in the supply room. The shot of her bottle falling to the floor? It doesn’t get much obvious and heavy-handed than that. Her breakdown in the Mess Tent feels equally forced. Margaret insists she hasn’t allowed Whitfield to be alone for two days–and moments later she has an attack of the DTs in front of half the camp.

M*A*S*H insisted on including at least two stories in every episode. Had “Bottoms Up” focused only on Whitfield and her drinking, perhaps it would’ve worked better. There would be more time for it to unfold rather than forced upon viewers.

The Charles B story is amusing enough but nothing special. Hawkeye shouldn’t be surprised B.J. had double-crossed him. After all, B.J. is famously a master prankster, as seen in “Dear Sigmund” during Season 5. 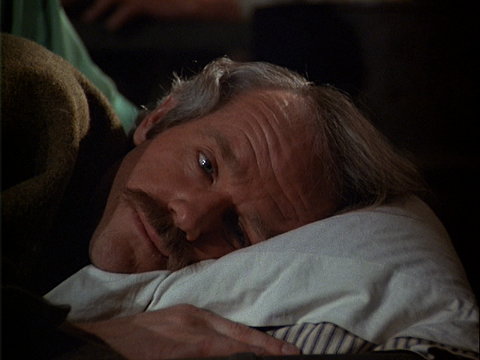 B.J. wakes up in the nurses’ tent.

I likely saw “Bottoms Up” for the first time more than 15 years ago. Yet I only realized the title works on two levels and connects to both story lines while rewatching it for this review.

It looks to me like Charles is holding a film camera in the crowd when B.J. runs out of the nurses’ tent. So how did Klinger develop photographs?

While Hawkeye is complaining in the Swamp, B.J. starts playing pyramid solitaire in his bunk.

Father Mulcahy is barely in this episode. He makes a brief appearance in the Mess Tent where he calls Hawkeye a goon and a blockheaded bozo.

11 Replies to “Episode Spotlight: Bottoms Up”