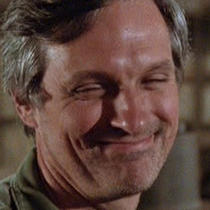 Capsule Summary: Hawkeye tries to use wine to get a date, Charles tries to get his hands on more of the same wine, and Colonel Potter tries to acquire a useful drug banned by the Army.

This episode–specifically Hawkeye’s storyline–might have worked better had it taken place during the first three seasons of M*A*S*H. Back then Hawkeye was far more believable as a womanizer. By Season 9, both the character and the series had shifted in tone so it felt out of character for Hawkeye to resort to such tactics.

On the other hand, part of me feels Hawkeye’s storyline never would’ve worked, not even during the wacky early years of the show. I get that the point of the storyline is to highlight how Hawkeye can be a real cad at times–and he does get his comeuppance in the end–but it was still over-the-top. I’m not sure there was any point during the show’s run where him trying to entice a nurse with a bottle of wine wouldn’t seem sleazy.

Maybe it would have been easier to watch had B.J. been more disgusted by Hawkeye’s action. True, he did call Hawkeye depraved and suggested the scheme was insulting to the nurses. But he didn’t try to talk Hawkeye out of going through with it. He almost seemed amused (or perhaps bemused).

While I appreciate how all three storylines intertwined to some degree, I would have preferred just two storylines. I think the curare storyline was very interesting, much more than Charles hoping to acquire fancy French wine, and wish it had been expanded. Both Charles and Klinger were involved in the curare storyline so there was no real need for a third storyline. 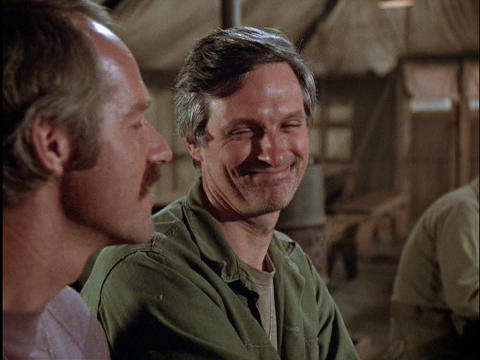 I’m sure the plot point about curare being banned by the U.S. Army was based on reality but I haven’t been able to find anything online explaining exactly how curare was used during the Korean War. Supposedly it was never approved for use and yet in Season 6’s “The Light That Failed” Charles nearly killed a patient by accidentally giving him curare, so the 4077th was using it at one point.

While Hawkeye is reading the three responses he received in the mess tent, B.J. is playing cards. There is a half-eaten doughnut on the table. I love doughnuts so they always catch my eye when watching M*A*S*H. I wonder if Mike Farrell was actually snacking on a doughnut while shooting this scene or if it was placed there as a prop.

Watch closely and you’ll see everyone turning to stare at Klinger and Potter as their “Just Married” jeep drives off, including a patient in a wheelchair. It’s gives the scene a little more life.

It’s too bad Canadian company clerk Turnball never met Radar. They were probably the only people to ever enjoy eating at the 4077th mess tent.