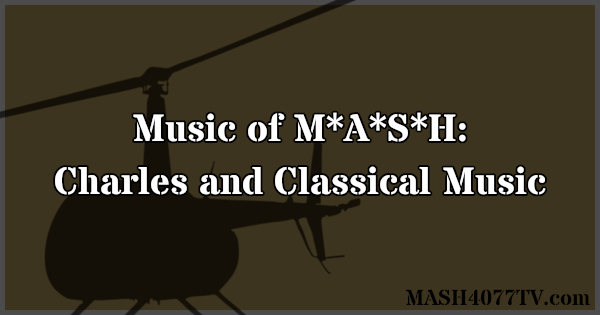 When Larry Linville opted not to return to M*A*S*H after his five-year contract ended, the writers were careful not to replace the spineless, incompetent Frank Burns with a similiar character. Instead, they created Charles Emerson Winchester, III: a brilliant yet arrogant surgeon raised in a wealthy Boston family, accustomed to the finer things in life like expensive wine and classical music.

Charles is first seen enjoying classical music at the end of the Season 6 season premiere (“Fade Out, Fade In”) and then sporadically throughout the rest of the series.

Although most of the classical music heard on M*A*S*H involves Charles, there were episodes that featured other characters listening to (or talking about) classical music. Who can forget Radar’s “Ah, Bach” from “Love Story” (Season 1)? Or Hawkeye and Kyung Soon listening to Beethoven in “In Love & War” (Season 6)?

Many thanks to classical music enthusiast TWoods for his invaluable help compiling a list of all the pieces Charles listened to on M*A*S*H.

Fade Out, Fade In

This piece helps Charles relax after being assigned permanently to the 4077th. He plays it while waiting for Hawkeye and B.J. to return to the Swamp so his practical joke on Hawkeye can unfold.

Charles enjoys this piece while relaxing in Hawkeye’s bathtub during a heatwave. He’s able to cut the line after a fight breaks out, distracting everyone else waiting for their chance to cool off.

Not only does Charles conduct along to this composition in the Swamp, he mimes singing along as well. Unfortunately for him, Hawkeye and B.J. return from Tokyo and ruin his day.

After a lengthy stint in surgery, Charles puts on some Beethoven to relax, frustrating Hawkeye and B.J. who just want to sleep.

Charles plays this piece for Sooni, hoping she’ll enjoy it. He calls it “Such stuff as dreams are made of” and hums along, but she doesn’t appreciate it.

NOTE: The cue sheet for this episode doesn’t include any of the following musical selections. Can anyone identify them?

Charles plays a recording of opera singer Enrico Caruso while he and Colonel Potter are in quarantine together with the mumps. Colonel Potter is less than impressed.

After Charles begins playing his Caruso record again, Colonel Potter rips it off the phonograph and flings it out of his tent, where it shatters against the side of an ambulance.

With Colonel Potter’s ears protected by a pair of makeshift earplugs, Charles is free to listen to his records–at least until Klinger, stricken with the mumps, joins them in quarantine.

Charles saves Private David Sheridan’s leg and is shocked when his patient only cares about his injured hand. It turns out Private Sheridan is a concert pianist whose career, it seems, is over. But Charles is able to find sheet music written for one hand. Private Sheridan is initially resistant but after Charles opens up about his inability to play music, the talented pianist plays the piece brilliantly with just his left hand.

“A War for All Seasons”

This piece is playing on the radio in Post Op when Klinger brings Hawkeye his package of sausage casings from Packo’s. Charles rushes in and wants to listen to baseball.

“Must we always listen to this mindless pap? Get to the sports news.”
Charles, “A War for All Seasons”

“Tell It to the Marines”

Charles is listening to this in Colonel Potter’s office when Potter returns from a conference in Tokyo. Dismayed at how Charles has taken over, Potter sneaks into the office and catches Charles by surprise. He then kicks Charles out–without his pants.

Charles hums a portion of this piece while stamping reports in Klinger’s office.

Charles is enjoying this composition, played on his reel-to-reel player rather than his record player, when Hawkeye and B.J. arrive and announce Park Sung will be staying in the Swamp for a few days.

Ellie surprises and impresses Charles by expertly playing a portion of this composition on the piano in the Officer’s Club. She mentions Dvorak and Brahms, two famous composers who also wrote folk dances, in an attempt to convince Charles to open his mind and “let a little fresh air in.”

Charles is listening to this on his record player in the Swamp when Margaret barges in to ask if he’ll give her nurses a lecture on using Levophed so she can go to Tokyo.

After Hawkeye moves out of the Swamp, Charles tries to listen to this piece but B.J. won’t stop sharing the contents of a letter from Peg. When B.J. turns off his light to go to bed, he asks Charles to turn down the music. Charles says he does but the volume doesn’t change.

Charles relaxes while listening to this composition when Father Mulcahy stops by the Swamp looking for B.J. He then insists on talking with Charles about Hawkeye in an attempt to trick the Swamp mates into reconciling.

This is playing in the Swamp when Hawkeye moves back in. B.J. is hard at work on a letter to his wife while Charles reads the paper.

Charles tries to listen to this during the tag scene, but B.J. is again sharing stories from Peg’s latest letter. An annoyed Hawkeye turns up the volume on the record player.

The U.N., the Night, and the Music

Charles is listening to this piece when Hawkeye brings Dr. Kent to the Swamp. Dr. Kent and Charles bond over their love of chamber music.

At the start of the episode, Charles turns this piece on and annoys B.J., who is suffering from an ingrown toenail. B.J. calls the piece “garbage,” infuriating Charles. Klinger stops by with the mail. Charles receives a package of records, including more Mahler.

Charles tries to listen this piece on the jukebox in the Officers’ Club but nobody else wants to hear it.

Charles uses Margaret’s phonograph to listen to this in the Swamp in order to annoy B.J.

Charles and Margaret play this piece to drive B.J. out of the Swamp.

This unidentified piece is playing in the Swamp while Hawkeye works on cataloging the 4077th’s new medicine to help out Klinger. Father Mulcahy barges in, turns off the music, and starts yelling at Charles.

Later, he acts as conductor in the Mess Tent, trying to improve their performance.

When the POWs are shipped out, they play the piece in the back of the truck carrying them away from the 4077th–and from Charles.

“For me, music was always a refuge from this miserable experience. And now it will always be a reminder.”
Charles, “Goodbye, Farewell and Amen”

16 Replies to “Music of M*A*S*H: Charles and Classical Music”