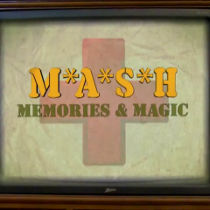 Back in January, I posted about a charity M*A*S*H Gala to be held January 23rd in St. Augustine, Florida to benefit Ayla’s Acres No-Kill Animal Rescue. Ed Asner hosted the gala, which featured guests Loretta Swit, Mike Farrell, and Jamie Farr plus a surprise appearance by an unidentified M*A*S*H cast member (who turned out to be Gary Burghoff).

While the group was in Florida, WTVG/13abc–a TV station in Toledo, Ohio–taped interviews with them for a local half-hour TV special titled “M*A*S*H Memories & Magic.” WTVG’s news director, Brian Trauring, conducted the interviews and produced the special. Kevin Beining photographed and edited it. An essay written by Trauring about the special was published on February 29th. A behind-the-scenes video can be found here.

Hosted by Diane Larson and Lee Conklin, “M*A*S*H Memories & Magic” aired on WTVG on Wednesday, March 2nd from 7:30-8PM ET and was made available online the following day. The station also aired several stories about Jamie Farr during its evening newscasts in February.

I was aware that WTVG aired a local special about M*A*S*H but only discovered it could be watched online a few days ago. It’s not a documentary. It doesn’t tell a story or attempt to cover the complete history of M*A*S*H. It’s short–only 22 minutes without commercials–but features some nice interviews with Swit, Farrell, Farr, and Burghoff. Although not part of the M*A*S*H Gala, William Christopher was interviewed as well. Ed Asner even makes a brief appearance.

If you can’t view the video or don’t have time to watch the full special, I’ve transcribed a few excerpts:

Mike Farrell on how worried he was about joining the cast:

And I thought, oh my God, what if they hate me for usurping the role of their brother and friend and comrade. What if the audience hates me? What if the audience simply can’t accept the fact that Trapper’s gone and this new creep B.J. has stepped in and the show tanks? And I thought to myself, “I will live in infamy for the rest of my life as being the person who killed M*A*S*H.”

William Christopher discusses how the cast wasn’t sure M*A*S*H would return for a second season:

And Alan walked to the door and said “You know, we may not see each other again. Maybe I’m saying goodbye.” And I thought to myself, “I think he’s wrong but I don’t know, we can’t tell.” We didn’t know M*A*S*H would be renewed.

Gary Burghoff talks about disagreements among the cast:

It’s been totally, totally overblown. We disagreed. You know, when you’re any kind of a family you have spats once and a while. But we were always on the same page. It was always about the work and doing it to the very best of our ability. And sometimes you fought over that because you disagreed on how to get there. But it was minor compared to the bonding that we had and the wonderful work we did together. I get very upset when they lead with that nonsense, that negative– We were positive. We were a positive force together.

Also, Farrell talks about the famous practical joke pulled by David Ogden Stiers that inspired the episode “An Eye for a Tooth” during Season 7. Loretta Swit briefly mentions the recent death of Wayne Rogers, only the latest member of the cast to pass away: “Those loses have been crippling in a very intense way because of our close-knit family ties.”

Because it was produced by a Toledo TV station, peppered throughout the special are reminders of Jamie Farr’s love of Toledo and, in turn, the city’s love of Jamie Farr. There’s a M*A*S*H-inspired mural at the local Texas Road House restaurant, photographs hang on the wall at Tony Packo’s, and there’s even a park named after him.

At the end of the special, the cast members reveal what mementos they kept from their time on M*A*S*H. Loretta Swit kept her dog tags; Mike Farrell has the San Francisco sign from the iconic sign post; Gary Burghoff has a bronzed “helmet liner” signed by the cast; and Jamie Farr has the fuzzy pink slippers from “The Trial of Henry Blake.”

An additional three “web extras” were not included in the special and are only available online. Poke around the WTVG website for more articles, photographs, and videos about “M*A*S*H Memories & Magic” and Jamie Farr.

WTVG should be applauded for putting together “M*A*S*H Memories & Magic.” That a TV station would go to the time, effort, and expense to produce a local TV special like this is a testament to how influential M*A*S*H was and how popular it remains.