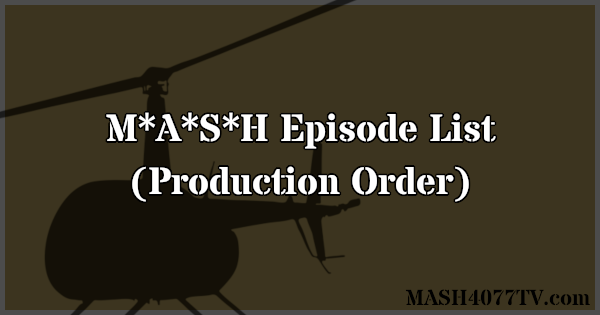 The following is a list of all 256 episodes of M*A*S*H in the order they were produced. Most sources state there are only 251 episodes of M*A*S*H but counting the five hour-long episodes–“Welcome to Korea” (Season 4), “Bug Out” (Season 5), “Fade Out, Fade In” (Season 6), “Our Finest Hour” (Season 7), and “That’s Show Biz” (Season 10)–as two half-hour episodes brings the total to 256. 20th Century Fox, the company that produced M*A*S*H, gave each hour-long episode two separate production numbers. I’ve used these production numbers to put together this list.

The episode number (i.e. 1×01) indicates when each episode aired on CBS. Compare these to the production codes to see how out of order certain episodes aired. For example, “M*A*S*H — The Pilot” (1×01) was the first episode aired during Season 1. “Henry, Please Come Home” (1×09) was the second episode produced but the ninth episode aired.

Perhaps the biggest discrepancy came in Season 5. “The General’s Practitioner” (5×20) was the seventh episode produced but aired 20th. “Goodbye, Farewell and Amen” (11×16) was the final episode aired but was actually the fourth episode produced for Season 11.

You can find a list of episodes in broadcast order here.