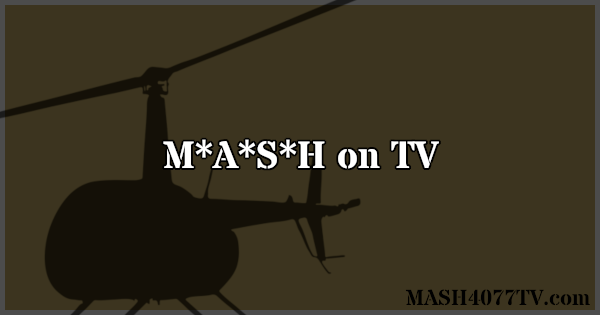 As of February 2021, M*A*S*H airs regularly in the United States on broadcast network MeTV. The series is also streaming on Hulu. See below for details.

For an in-depth overview of how M*A*S*H has been syndicated over the years, please read my M*A*S*H in Syndication article.

Digital specialty network MeTV airs M*A*S*H from 7-8PM ET on weeknights and Sunday evenings. MeTV has more than 150 affiliates and reaches more than 90% of television households in the country and you can check to see if you get the network here. MeTV started airing M*A*S*H in December 2010.

M*A*S*H occasionally airs on Decades, another digital specialty network launched in May 2015. Decades is a sister network to MeTV. Broadcast network ION Television previously aired M*A*S*H from 2008 to 2010.

The series may also air in syndication on local TV stations across the country. Be sure to check your local listings.

M*A*S*H is not currently airing on any cable channels in the United States.

Hulu began streaming M*A*S*H in June 2018. The episodes are in high definition and widescreen.

(Previously, Netflix streamed the series from February 2015 to April 2016.)