The M*A*S*H signpost is an iconic piece of television history, instantly recognizable by millions. It represented home to the members of the 4077th, pointing in all directions towards a variety of cities, no matter how far away. At the end of the final episode the signpost was taken apart, with characters taking the signs to their hometowns. 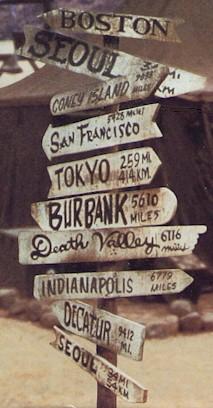 Here is a listing of most of the cities and distances on the signpost:

It’s interesting that some of the more famous hometowns, like Hawkeye’s Crabapple Cove or Radar’s Ottumwa, aren’t on the signpost.

The Signpost Through The Years

Notice that for some reason there are two signs pointing towards Tokyo in the Season One episode “Love Story” (and likely many other early episodes).

In “Temporary Duty” Charles added his hometown of Boston to the top of the signpost. 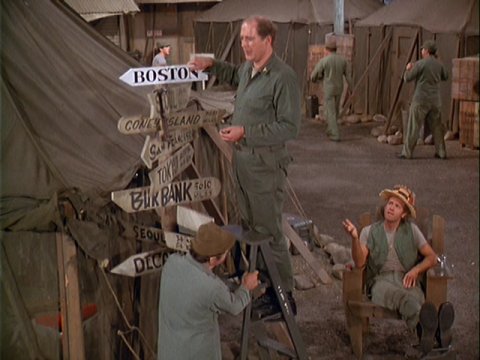 Near the end of “Goodbye, Farewell and Amen” the signpost was taken apart by jubilant doctors and nurses preparing to return home at the end of the Korean War. 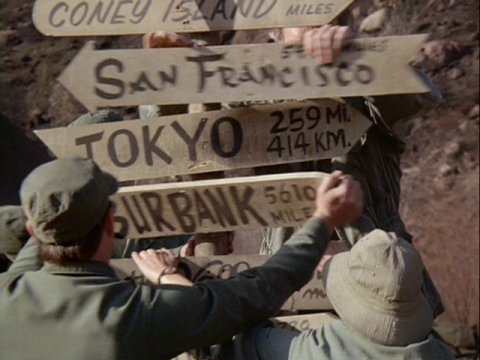 “Goodbye, Farewell and Amen”
The Signpost Behind the Scenes

A total of three signposts were used during the production of M*A*S*H. Since M*A*S*H was filmed both on sound stages on the 20th Century-Fox lot and out at the Fox Ranch in California two signposts were originally constructed. During the final season, a fire burned the outdoor set, including the signpost. A third signpost was soon fashioned to replace the one that was destroyed.

After the series ended, the third signpost was was donated to the Smithsonian by 20th Century Fox and was on display with other M*A*S*H props and memorabilia. Currently, the signpost is part of the National Museum of American History. The Smithsonian signpost was also on display in the American Pastimes: Entertainment portion of the Remembering Gallery in America’s Smithsonian, which celebrated the 150th anniversary of the Smithsonian.

It was even included in The Virtual Smithsonian, for the Smithsonian Institution Millennium Project. Footage of the M*A*S*H exhibit at the Smithsonian and a 3D model of the signpost are available here. Use the following steps:

The sound stage signpost was later owned by Bert F. Allen, set decorator for M*A*S*H. It was sold by Profiles in History during its July 2005 Hollywood auction. It had a pre-sale estimate of between $10,000 and $12,000 and eventually sold for an impressive $25,000.

Fans of M*A*S*H have created their own versions of the signpost. In June 2002, I received an e-mail from Larry Lee Moniz, with an attached photo of a reproduction of the signpost, circa Season Eleven. I was quite impressed, and asked if I could post the picture here. Larry graciously agreed. Here it is: 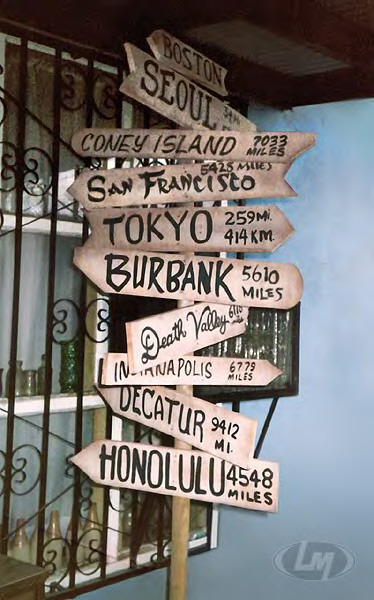 And in August 2004, Ruth Shea sent me an e-mail explaining how her decision to build a miniature version of the signpost:

“I have been a MASH nut for years. My dad got me into watching it, and we used to watch it together – it was one of the few things we ever agreed on – it was a magnificent show. He’s been deceased for the last three years, and around the time of year when the anniversary of his death rolled around in June, I became obsessed with the signpost. I thought how cool it would be to have a reproduction of the signpost in my living room. My boyfriend convinced me, however, that it would be too large for our living room, so I compromised with him. I made a miniature signpost, about 10 or 11 inches high, made of lightweight plywood, small pieces, and made individual signs on it. It’s quite authentic, I think, and I put a lot of time into it – I think it took me about three hours to make. It was a labor of love, actually. I think I did it for my father. It has sat on my bedside table ever since.” 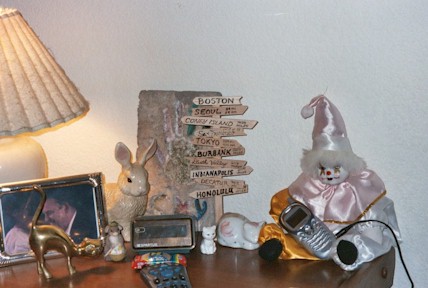 In July 2009, Steven e-mailed me with incredible photos of his full size replica of the signpost that he built with a little help from his father. Here’s how he put it together:

“I am a huge MASH fan. I am only 15 years old and I decided that I want to make a tribute to the show. So I decided to make a replica signpost, modeled after the one donated to the Smithsonian. I wanted to make it 100% replicated, including its size.

“Each sign (depending on which city) is roughly 4-6 inches wide, and around 3-4 feet long. The pole I got to put the cities on is 8.5 feet tall… No kidding! It took me around 3 months to make it, even with my Dad’s help. I had to cut the pieces, paint them white and sand them down to make them look worn, spray them with a weather resistant polyurethane, make a wooden base for the pole, and finally screw the signs in.”

Here’s a photograph of Steven’s signpost: 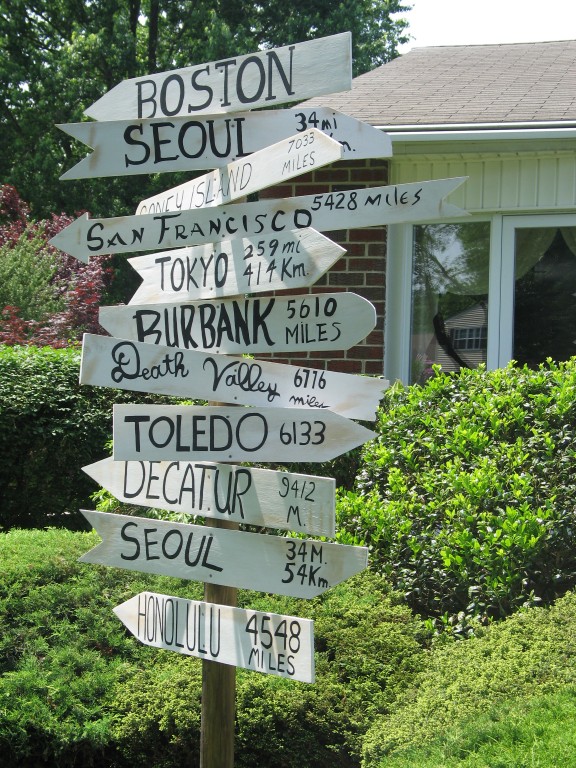 In October 2009 Joe sent me some pictures of his Popsicle stick version of the signpost: 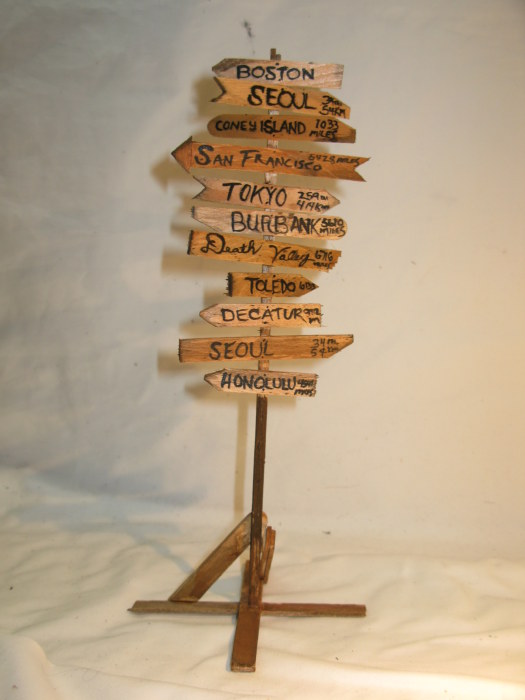 In November 2009, Steven e-mailed me again with pictures of a miniature signpost he built. Here’s what he had to say about it:

It is nothing big, only 10 inches tall. But that’s what a miniature is, I guess. The signs themselves are made of balsa wood and I used rocks and fake shrubbery to create the illusion of a foreground. 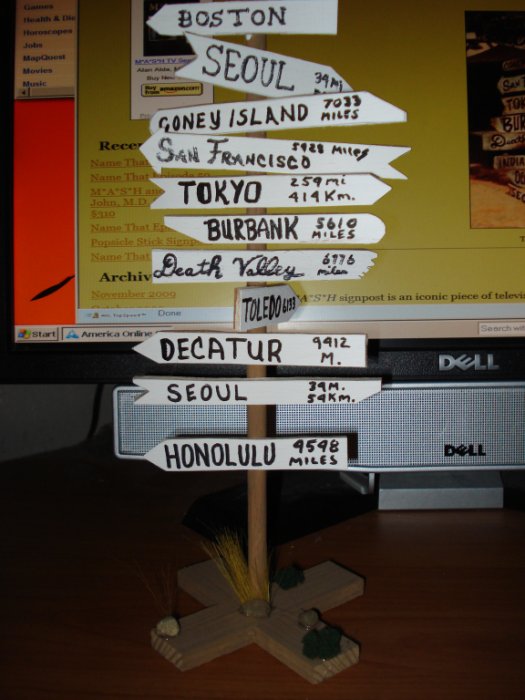 In February 2012, SM e-mailed me with pictures of a signpost he built for a student veterans fundraiser at Siena Heights University (in Adrian, Michigan): 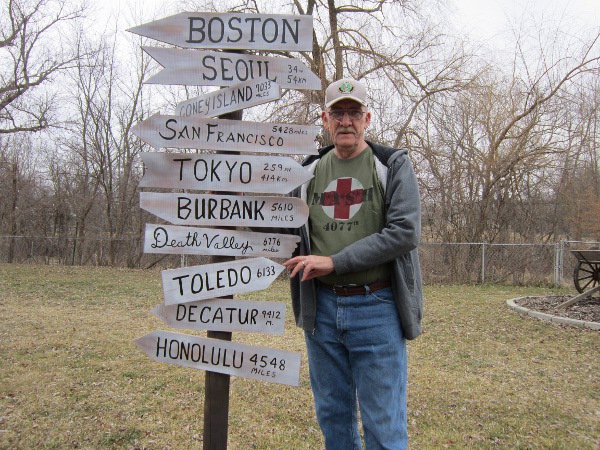 41 Replies to “Prop Spotlight: The Signpost”