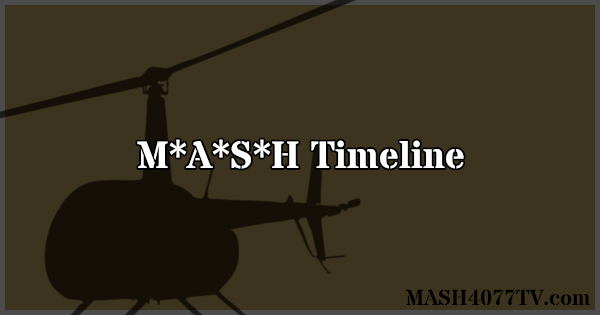 With contributions from Kara and Big Daddy O’Reilly.

It’s hard to believe that eleven years worth of stories were supposed to have taken place in the three years of the Korean War. To get around this time problem, the writers of M*A*S*H decided not to worry about it and concentrate instead on telling quality stories. Still, it is interesting to try to piece together a timeline for the series using dates mentioned in a variety of episodes.

When Do Colonel Potter and B.J. Arrive?

How is all this possible? The most likely solution is that the writers realized after “Welcome To Korea” that they had made Colonel Potter and B.J. arrive too late in the war, that Trapper and Blake shouldn’t have been there for a year. That explains how Potter arrives in 1952 but is shown in 1951. It doesn’t explain Halloween of 1953, which can’t be explained as anything more than a simple mistake.

“And also in the episode “Dear Sis” I believe that is another Christmas episode which can’t really be explained either. unless we assume Trapper and Henry were only there for a couple months. I agree with you. The writers must have gone back and repeated time over again because the series continued for so many years. They needed more time so they went back and rewrote some in.”

The following timeline is simply an attempt to chart some of the dates given in episodes of M*A*S*H. We all know there is no way to cram eleven years worth of episodes into three years of war. So keep that in mind. Dates in italics took place in reality.

Presumably at least the first season of M*A*S*H is supposed to take place during 1950; at the very start of “M*A*S*H – The Pilot” the subtitle “Korea 1950” is shown on the screen. However, in “Requiem For A Lightweight,” the third episode of the first season, Henry states that he can’t use the same fighter in a boxing tournament that he used “last year.”

The entirety of Season One took place during less than nine months, because Henry’s wife gave birth stateside in “Showtime” and as Radar noted, Henry must have been present for “the important part” of making a baby.

September 19th, 1950
Colonel Potter’s last stint in surgery before coming to the 4077th (in “Welcome To Korea” it is stated twice that Colonel Potter hadn’t been in surgery in two years, this could be a rough estimate).

April 1st, 1951
Colonel Potter tries to keep the camp from playing any practical jokes during April Fools’ Day, as a stiff-nosed Colonel is coming for a visit (“April Fools“).

August 9th, 1951
Hawkeye is fed up with army life, and the 4077th, and hides out in Rosie’s Bar, as eventually the rest of the camp does too; all the while, Margaret encounters Jack Scully for the first time, Klinger plays Craps with some Korean locals, and Radar discovers a passed out major with no records on him (“A Night a Rosie’s“).

August 10th, 1951
Hawkeye and B.J. wake up in the now trashed out Rosie’s Bar, where the major whom was found passed out finally awakens, last remembering he was in Hawaii… on the night of July 4 (“A Night a Rosie’s“).

September 11th, 1951
Private Rich is wounded while in combat, sustaining a throat injury, and is air lifted to the 4077th, where he undergoes surgery, and awakens in Post-Op, next to an obnoxious patient, who tries to act like he’s in more pain than he really is in order to get better care, and lengthen his stay (“Point of View“).

September 12th, 1951
Rich wakes up the next morning, and sees what an average day is like at the 4077th, including Margaret giving him a sponge bath, Klinger giving him a tour of the camp via wheelchair, communicating with Colonel Potter and Hawkeye through a note pad which he is using to write to his parents (which is date 9-12-1951). Rich later suddenly has trouble breathing, and needs to be rushed back into O.R. (“Point of View“).

September 13th, 1951
Rich awakens and learns that his fracture larynx was the cause of his sudden breathing problem, but he is now able to speak more coherently when his breathing tube is squeezed (“Point of View“).

September 19th, 1951
Hawkeye stole a steam shovel from the Tokyo Provost Martial (according to his record in “Change of Command“, Colonel Potter said that “a year ago…” which could be a rough estimate).

October 17th – 22nd, 1951
Radar records the weekly report of the 4077th’s antics, including Sidney Freedman’s first observation of Klinger, and Trapper’s patient dying from contaminated blood after the I.V. is smashed by a berserk Chinese P.O.W. in O.R. (“Radar’s Report“).

December 25th, 1951
B.J. works to keep a dying man alive until December 26th so that his children don’t have to remember Christmas as the day their daddy died (“Death Takes A Holiday“).

June 13th, 1952
Radar receives his study guide for a correspondence course in enrolled in for the Las Vegas Writing School in (as stated in “The Most Unforgettable Characters“; this episode also features Hawkeye and B.J. staging a fight for Frank’s birthday the same day, which conflicts with Frank’s birthday in “For Want Of A Boot,” which takes place during the middle of winter… unless that was his half birthday).

September 9th, 1952
Trapper receives his orders to be shipped stateside (this occurred 3 days before he left, as stated in “Welcome To Korea“).

October 9th, 1952
Clete Roberts returns to interview the staff of the 4077th a second time (“Our Finest Hour“).

October 11th, 1952
Hawkeye assumes command after being in charge goes to Frank’s head. He is later brought up on charges (“The Novocaine Mutiny“).

December 26th, 1952
Colonel Potter has the enlisted men and the officers switch places for a day (“‘Twas the Day After Christmas“).

April 22nd, 1953
Klinger tells “Captain” Schaffer that by April 22, he will have been wearing ladies’ dresses to buck for a Section-8 for exactly two years (as stated in “Fade Out, Fade In“), which suggests he would have been drafted, and shipped out just before April 22 of 1951.

July 4th, 1953
Members of the camp hold a party on a beach in Inchon, on the way back they are almost spotted by North Koreans, in order to keep from being heard a Korean mother smothers her baby, which causes Hawkeye to become mentally unstable (“Goodbye, Farewell, and Amen“).

July 27th, 1953
The Korean War ends when the cease-fire goes into effect 12 hours after the armistice was signed.

September 26th, 1953
In the first episode of AfterMASH, Sherman Potter writes a letter to Klinger informing him of his reconciliation with his wife after returning from Korea.