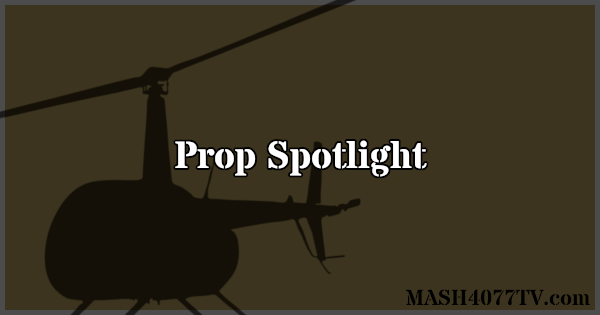 Some of the props seen on M*A*S*H during its 11-year run are immediately recognizable by fans. The 4077th’s signpost has become a television iconic. Radar’s teddy bear, the still in the Swamp, and Colonel Potter’s paintings all played roles both big and small in various episodes. The following pages provide detailed information about specific props:

One of the most iconic images in television history, the M*A*S*H signpost stood outside the Swamp, reminding members of the 4077th of home and family. The history of the actual signpost props is explored in this article, as well as reproductions created by fans.

Located in the Swamp, the still spent eleven years dispensing gin for Hawkeye, Trapper, B.J. and others. It was destroyed, rebuilt, torn down and reconstructed. And during the first season of M*A*S*H it was shown in three very different incarnations.

Over the years, Colonel Potter was shown painting a variety of portraits ranging from Radar to Klinger (with discus) to Hawkeye (and his tongue depressor monument) to his own thumb. See them all and learn a little about who actually painted them.

Radar’s teddy bear made its first appearance in an early Season One episode. The bear was obviously well-loved because it was missing an eye. It was representative of the many young men who fought in the Korean War, men who were barely more than boys. When Radar left, the bear didn’t go with him, signifying his transition from a boy to a man.