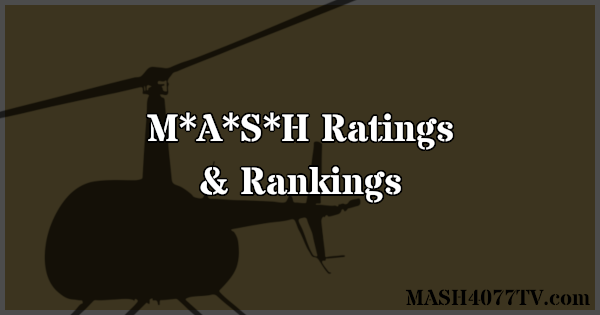 On a weekly basis, M*AS**H was rarely the highest rated television program, although it did regularly rank in the Top Five, Top Ten, or Top Twenty, depending on the competition. It might surprise fans of M*A*S*H to learn that the series never once reached the top spot during any of its eleven seasons. Its first season on the air, from 1972-1973, it ranked 46th. The following season, however, it skyrocketed to fourth in the ratings and never fell out of the Top Twenty, only once falling out of the Top Ten. The eleventh and final season was the third highest-rated show of the 1982-1983 television season, the closest the series ever came to the number one spot.

The following tables list the weekly rankings for M*A*S*H, season by season. Nielsen information comes primarily from The Los Angeles Times for Seasons One through Six; The New York Times for Seasons Seven through Ten, and The Associated Press for Season Eleven. Starting midway through Season Two, the only Nielsen information I have found thus far lists either the Top Fifteen or Top Twenty rankings, with the occasional list reaching the Top Thirty. In some cases, I was unable to find any information for certain weeks and thus if an episode has no ranking, it could mean it finished outside the Top Twenty or I have no information one way or the other.

I have written brief overviews of each season, pointing out episodes of interest and explaining why certain episodes had low rankings where I could. Excluding Season 1, with the information I have available, the lowest-rated episode of M*A*S*H was Season Ten’s “Picture This,” aired April 5th, 1982, which ranked 36th due to heavy competition from NBC. It is possible that other episodes ranked lower, but even if they did, the vast majority of the 227 episodes broadcast between September 15th, 1973 and February 28th, 1983 ranked in the Top Twenty. An incredible achievement.

The very first episode ranked 45th for the week and later episodes would sink even lower. However, during the second half of the season, M*A*S*H stabilized and even saw some improvement, reaching the Top 30 on occasion and even breaking the Top Twenty in March 1973. The turnaround wasn’t enough to keep M*A*S*H from finishing the 1972-1973 season in 46th place.

CBS wisely moved M*A*S*H to 8:30PM Saturdays, sandwiched between hits All in the Family and The Mary Tyler Moore Show. The new time slot worked wonders for M*A*S*H and the series spent the bulk of the 1973-1974 season comfortably in the Top Ten, ranking 4th for the season.

M*A*S*H was moved again for its third season, this time to Tuesdays at 8:30PM. It would face The ABC Movie of the Week and The CBS Tuesday Night Movie. M*A*S*H easily beat its competition and would top the Nielsen charts for potentially the first time with the final two episodes of the season.

The series finished the 1974-1975 season in 5th place, down one slot from the previous season.

M*A*S*H moved to Fridays at 8:30PM for its fourth season, which saw the introduction of Mike Farrell and Harry Morgan. CBS was hoping to blunt NBC’s dominance of Friday evenings. M*A*S*H was scheduled opposite NBC’s strong Chico and the Man and fell out of the Top Twenty for the first nine weeks of the season.

The November 11th episode, “Dear Peggy,” was given a test broadcast in the Tuesday 8:30PM time slot the series had occupied the previous season. Ratings shot up. Starting in December, M*A*S*H was moved to Tuesdays at 8:00PM and did well enough to rank 15th for the season, down ten spots from the previous season.

Only one episode, “End Run,” failed to make the Top Twenty. The reason? It aired during the historic week when ABC broadcast the miniseries Roots and utterly dominated the Nielsen ratings.

The introduction of David Ogden Stiers during the season premiere performed well, ranking 5th for the week. But for the next four months, M*A*S*H languished at the bottom end of the Top Twenty due to competition from ABC’s Three’s Company. Beginning January 30th, CBS moved the series to Mondays at 9:00PM and saw the ratings jump up, with the season finale ranking 1st.

M*A*S*H continued in the Monday 9:00PM timeslot it had taken over halfway through its sixth season. For the bulk of the season, the series continued to rank in the top Ten or Top Fifteen, with a few exceptions.

The third episode of the season, “Lil,” tied for 20th due to competition from NBC’s “Little Women” miniseries. The fifth episode of the season, “The Billfold Syndrome,” faced a special 90-minute episode of NBC’s Little House on the Praririe and fell out of the Top Twenty. In mid-February, CBS broadcast the second half of Gone with the Wind on Monday, February 12th, pre-empting M*A*S*H.

For the 1978-1979 season, the series ranked 7th, a slight improvement from the previous year.

M*A*S*H spent another season in its Monday 9:00PM timeslot, with every episode ranking in the Top Fifteen save two. On October 1st, an address from President Carter on the three networks pushed “Guerilla My Dreams” to 9:15PM and it faced stiff competition from “The 17th Anniversary Tonight Show,” which ranked 3rd from the week. And on December 31st, “Yessir, That’s Our Baby” fell out of the Top Twenty despite facing relatively weak competition from a pair of movies on ABC and NBC.

The 1980-1981 television season was delayed due to an actor’s strike. When it did begin, M*A*S*H was once again airing on Mondays at 9:00PM and this time, every single episode did rank in the Top Fifteen. In fact, with the exception of the season premiere, every episode of the season ranked in the Top Ten, with eleven ranking in the Top Five. Those high ratings helped M*A*S*H end the 1980-1981 in 4th place.

The 1981-1982 television season was delayed due to a writer’s strike. M*A*S*H spent its fourth consecutive season in its Monday 9:00PM timeslot. Several episodes ranked outside the Top Fifteen due to strong performances by programming on ABC and NBC. For example, on November 9th, “Rumor At The Top” faced stiffer than usual competition from NFL Monday Night Football on ABC. And on February 8th and February 15th, 1982, M*A*S*H faced powerful films on ABC: the second half of Superman and The Jerk, respectively.

The April 5th episode, “Picture This,” was up against The Kid with the Broken Halo on NBC and sank to 36th for the week.

Weak performances from these episodes saw M*A*S*H drop slightly to 9th place for the 1981-1982 season.

M*A*S*H spent its shortened eleventh season — it’s last — in its customary Monday 9:00PM timeslot. The February 7th episode, “Friends and Enemies,” faced an installment of “The Winds of War” on ABC and was shut out of the Top Twenty. The series sprang back the following week, ranking 8th, followed by a 5th place ranking for the penultimate episode.