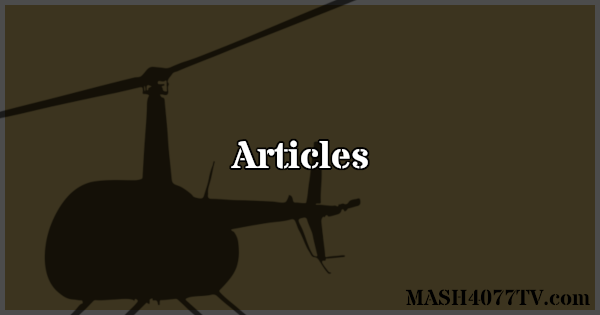 The following articles cover a wide variety of topics relating to M*A*S*H, ranging from a history of the show on home video to the 1983-1985 M*A*S*H exhibition at The Smithsonian.

Be sure to check out the AfterMASH section of MASH4077TV.com to learn more about the short-lived M*A*S*H spin-off. Also, visit Television Obscurities to learn about “W*A*L*T*E*R,” an unsold CBS sitcom pilot from 1984 starring Gary Burghoff.

The final episode of M*A*S*H famously drew a huge number of viewers. Exactly how many people were watching on February 28th, 1983 and is “Goodbye, Farewell and Amen” still the highest-rated and most-watched program in television history?

This ninety-minute documentary, originally aired on PBS, features a plethora of behind-the-scenes footage and interviews about what goes into making an episode of M*A*S*H. Unfortunately, it has yet to be released on DVD.

M*A*S*H at The Smithsonian

From September 1983 to January 1985, The Smithsonian Institution’s National Museum of American History hosted an exhibition called “M*A*S*H — Binding up the Wounds” containing two original sets from the show: The O.R. and The Swamp.

An in-depth look at how M*A*S*H has been syndicated over the decades, starting with late night and daytime runs on CBS in the late 1970s and later off-network/local and cable airings.

M*A*S*H first came to home video in 1983 when the series finale was released on VHS, LaserDisc and CED. Read all about the show on VHS and DVD plus digital services like iTunes and Amazon.

The forgotten “spin-off” of M*A*S*H, this animated spoof aired as part of a Saturday-morning children’s show and featured a group of mounted police dogs with names like Bullseye, Trooper Yoe and Sonar.