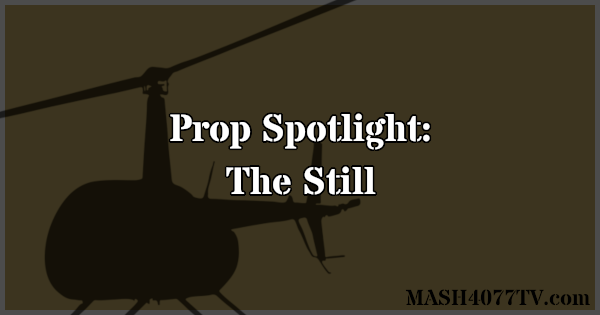 For eleven years, the cornerstone of the Swamp was the homemade distillery. Presumably, Hawkeye and Trapper built it together and it was a daily presence in their lives. Later, B.J. came to love the contraption just as much as Trapper. Over the years it was destroyed — once by Frank, once by B.J. — only to be rebuilt and returned to glory. Hawkeye called the gin it dispensed, often strong enough to curl your toes, the breakfast of champions.

The still went through three incarnation during the first three episodes produced. Not the first three aired, the first three produced. CBS often aired episodes out of order, as was and is a common practice with sitcoms. In each of these episodes the still looked very, very different. In “M*A*S*H – The Pilot” (originally broadcast September 17th, 1972; production number J301), which was the first episode produced and aired, the still is a large metal barrel with a copper coil at the top. It sits on a small portable stove. Frank, in a rage, grabs the still and winds up throwing it to the ground. We never see it repaired. 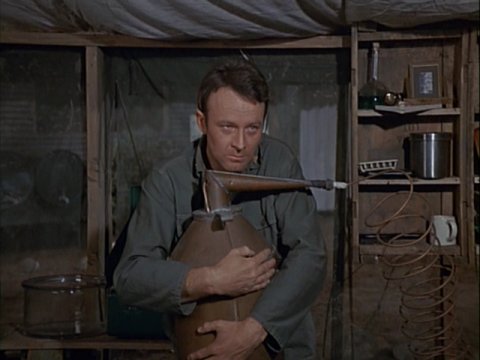 The second episode produced was “Henry, Please Come Home” (originally broadcast November 19th, 1972; production number J302) although it was the ninth episode to be aired. When Frank is placed in command he marches into the Swamp with an aide and an MP and confiscate the still at gunpoint. It is now a large glass jar connected with the same tubing to various glass beakers. Although Hawkeye, Trapper and others are shown drinking at the end of the episode we never see the still returned to them. 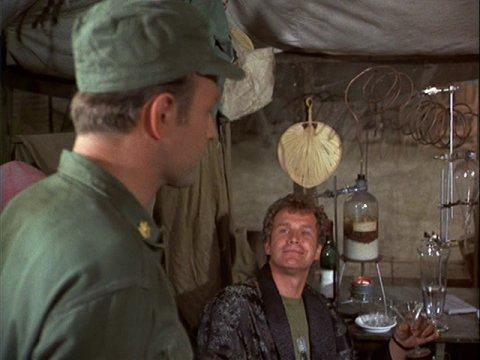 Finally, in “To Market, To Market” (originally broadcast September 24th, 1972; production number J303), the third episode produced and the second aired, the familiar still makes its debut, with a large round glass beaker connected to a metal pipes and assorted other glass beakers and, of course, the same copper coil. 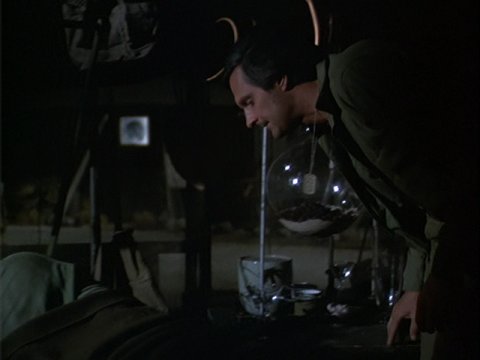 “To Market, To Market”
The Still Over The Years

In “Cowboy” (originally broadcast November 12th, 1972) Trapper is shown hard at work on a new batch of gin. 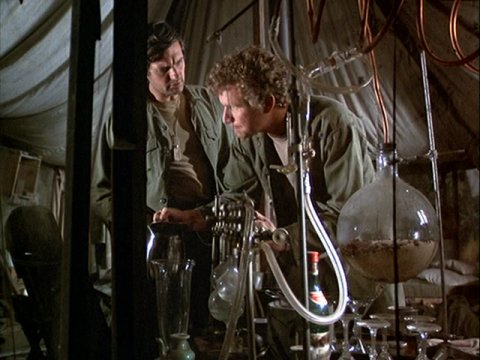 Later, in “Alcoholics Unanimous” (originally broadcast November 12th, 1974) Frank is once again in charge and orders Radar to take apart the still. Thankfully Trapper is able to make quick repairs. 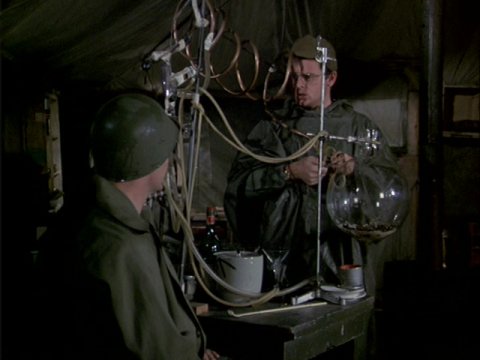 When the 4077th has to break down camp and leave for safer grounds in “Bug Out” (originally broadcast September 21st, 1976) Hawkeye stocks up on gin before B.J. begins to take apart the still for transportation. Frank soon arrives and insists that the still cannot be transported on military trucks because it is not military equipment. B.J. explains that the heating coil is from an ammo truck, the funnel is from the generator shed and the filter is made with shredded skivvies (Frank’s, to be exact). 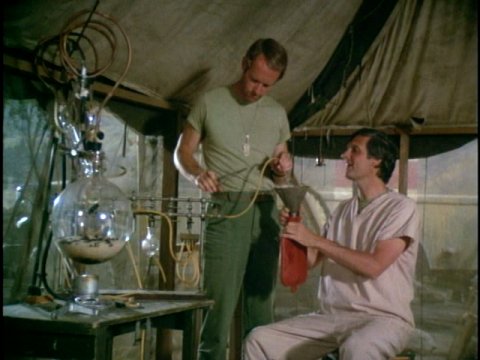 Later in the episode, Radar informs Hawkeye that the still is being transported via Wat San Lee’s cab along with Radar’s animals and Klinger’s dress collection. 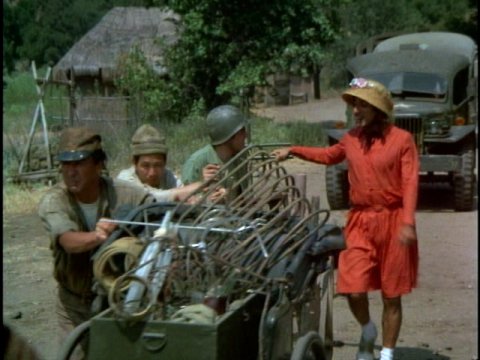 In “The Merchant of Korea” (originally broadcast December 20th, 1977) Hawkeye and B.J. roll up the netting on the Swamp and set up chairs just outside the tent. They extend the tubing from the still to a table set between them for easy access. 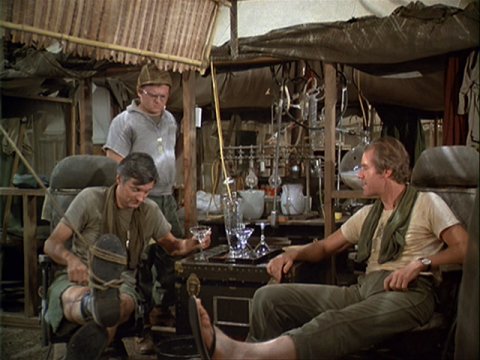 “The Merchant of Korea”

In “Temporary Duty” (originally broadcast February 13th, 1978) Roy Dupree speaks poorly of the still’s alcohol and attempts to improve on the engineering but instead breaks the coil. 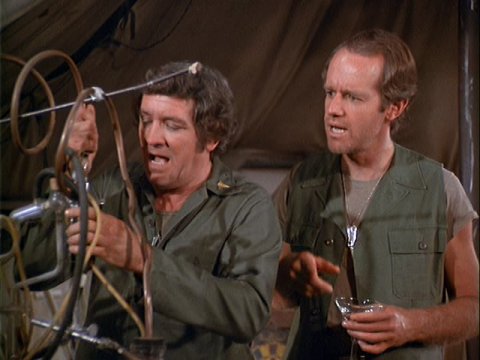 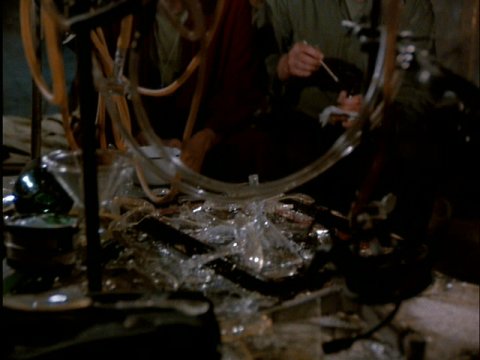 At the end of the episode Hawkeye, B.J. and Klinger rebuild the still.

In “The Moon is Not Blue,” after General Rothaker bans booze on base, Hawkeye and B.J. return to the Swamp to discover that Colonel Potter has reluctantly removed their still for the duration of Rothaker’s visit. Its return is not shown on screen. 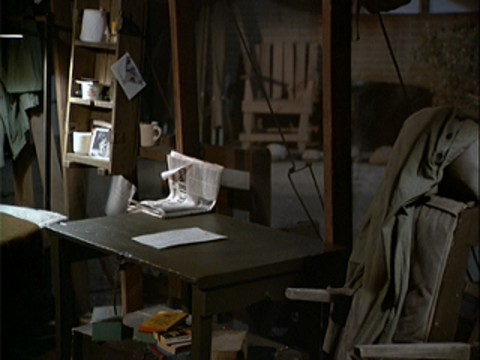 “The Moon is Not Blue”
The Still At The Smithsonian

Following the end of production on M*A*S*H in January 1983, 20th Century-Fox donated the O.R. set and the Swamp set to the Smithsonian Institution in Washington, D.C. Included was the still. An exhibition was held at the National Museum of American History from July 1983 to January 1985. When the exhibition closed, the sets were packed up and placed in storage. The still is likely in a box somewhere in a warehouse.

Here’s a photograph of the still as it appeared in the exhibition from The Complete Book of M*A*S*H:

The Still at the National Museum of American History

66 Replies to “Prop Spotlight: The Still”