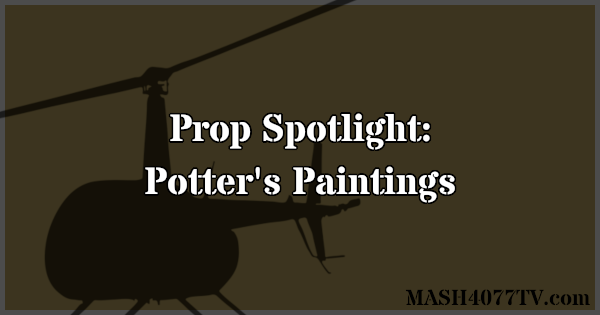 Near the end of Season Four, one of Colonel Potter’s hobbies was introduced: painting. In “The More I See You” he sets up his easel out in the open to a portrait of Radar and later, in his office, paints Klinger holding a discus (or, more accurately, a plate). 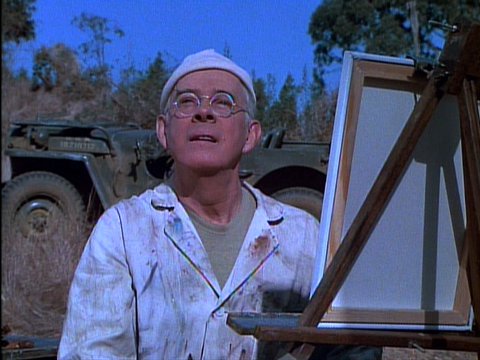 Colonel Potter Painting in “The More I See You”

Over the next eight seasons he is seen painting numerous times, although occasionally the actual paintings are never shown. The question of who painted these paintings has intrigued M*A*S*H fans for decades. It was not actually Harry Morgan, although he obviously faked the act of painting many times. Nor was it Gary Burghoff, an accomplished wildlife artist (or, for that matter, Kellye Nakahara, an accomplished watercolor artist).

In January 1997, Larry Gelbart confirmed in a post to alt.tv.mash (the M*A*S*H Usenet group) that Burghoff was not the artist:

Potter’s paintings were not the work of Gary Burghoff. They were done by studio artisans.

And in February 2002, he made a succinct post in response to a question about whether Harry Morgan actually painted the paintings:

>Just wondered if Harry Morgan reall DID paint them
>

So who did paint them? In March 1996, Michael Hirsh made the following post to about the identity of the artist responsible for the paintings:

The paintings were done by an artist hired by the MASH propmaster.

And in November 1997, Hirsch posted the following, again stating that the unidentified painter was hired by the M*A*S*H propmaster:

Leroy Nieman wouldn’t work for what the MASH propmaster would pay to have “Potter’s Paintings” painted. Getting those pictures painted was a fairly routine assignment for a Hollywood propmaster. While I don’t know who he hired, I’m reasonably certain there were any number of artists working in LA who would gladly have taken on the job.

The actual artist (or artists, as the case may be) has never been identified.

In “The More I See You,” Potter is seen working on two paintings. First, he paints a portrait of Radar holding a medical bag:

Later, he paints Klinger with a discus, mid-throw: 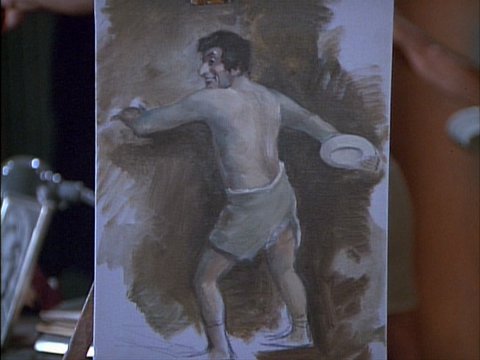 In “Hawkeye Get Your Gun,” Potter paints Hawkeye with his feet up on a table, holding a drink: 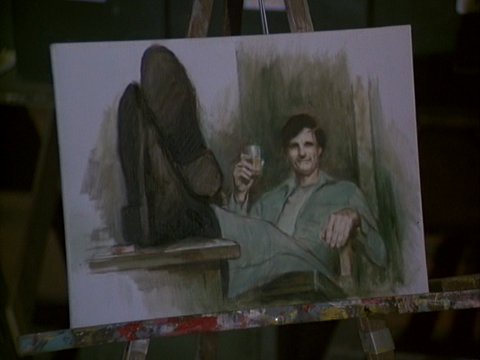 Colonel Potter’s Painting of Hawkeye from “Hawkeye Get Your Gun”

In “The Winchester Tapes,” Potter paints Charles with a rather angry expression on his face (“Don’t change the color of your face, I’m out of umber!”): 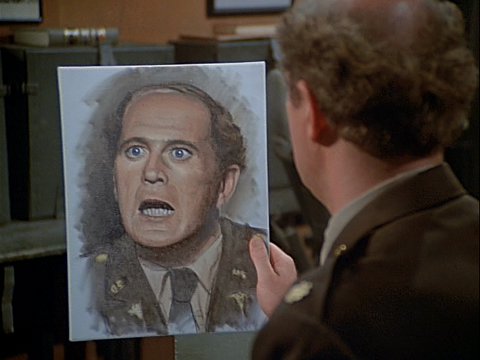 Colonel Potter’s Painting of Charles from “The Winchester Tapes”

In “They Call the Wind Korea,” Potter paints his own thumb: 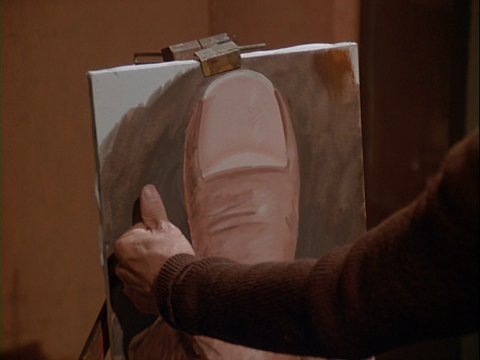 In “Depressing News,” Potter paints Hawkeye next to his tongue depressor monument: 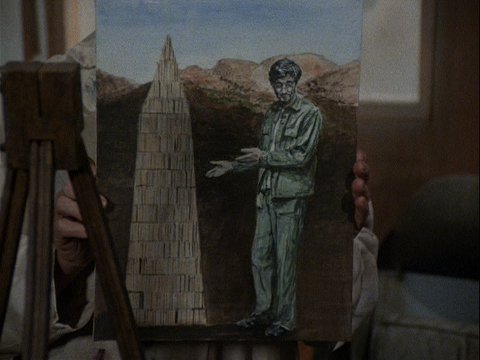 In “Rumor At The Top,” Potter paints a portrait of Father Mulcahy in his Catholic finery: 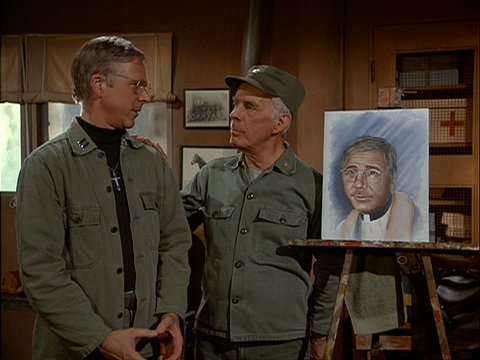 In “Picture This,” Potter goes to great lengths to paint a group portrait: 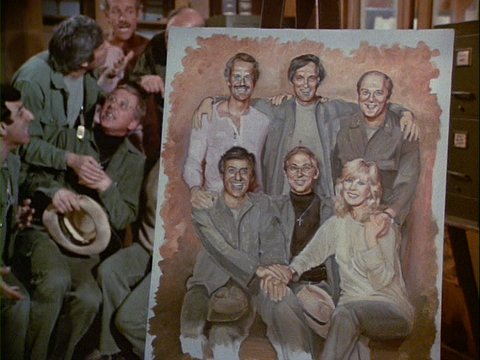 In “Dear Uncle Abdul,” Potter works on a self-portrait, using Klinger atop a horse as a body double (“Suck in that nose!”), planning to work in his own face at a later date. In “Heal Thyself,” while in bed, he works on an unidentified painting. And in “Bottom’s Up” he paints a United States president.

In “War Co-Respondent,” Aggie O’Shea and Potter discuss Potter’s paintings, including an incomplete painting of Sophie and his paintings of Radar, Klinger, his thumb, and Charles. Aggie asks Potter whether he has ever done a painting of B.J., to which Potter replies that he is not too good on teeth. At the end of the episode, Aggie sends Potter a drawing of B.J.

The Paintings in Potter’s Office

As they were created, the various paintings were hung in Potter’s office. His portrait of Radar was hung on the wall behind his desk for a while. It later later seen on the wall to the left of the doors into the office, above Klinger with the discus. Later, Radar was replaced by Potter’s thumb. The painting of Charles was added to the right side of the door. Klinger with the discus was later replaced by the painting of Charles, which itself was replaced by Hawkeye and his tongue depressor monument. His portrait of Father Mulcahy was later added to the wall below Charles.

At some point, all of the paintings were removed for reasons unknown. They are not present in any of the episodes actually produced for Season 11 but can be seen in episodes that were held over from Season 10.

Where Are They Now?

The current whereabouts of the paintings is not known. They were not sent to the Smithsonian in July 1983 for used in the “Binding Up the Wounds” exhibit (read more about the exhibit here). It is possible they were given to members of the cast or crew once production ended. None are known to have been auctioned off.