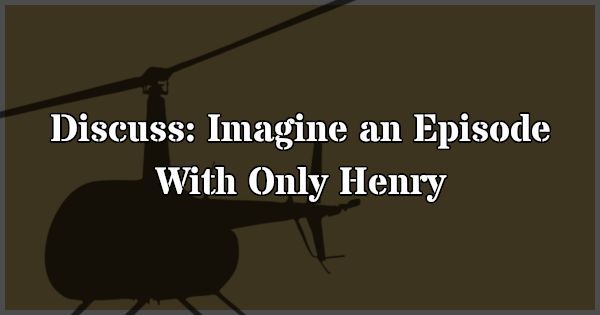 Today’s topic is: Imagine an episode with only Henry

We’re in the 10th and final week of our “Imagine an Episode with Only…” journey. We’ve already imagined episodes with only Margaret, Colonel Potter, Trapper, Father Mulcahy, Frank, Radar, Charles, B.J., and Klinger. Today, let’s share our ideas for an episode featuring Henry. He doesn’t have to be literally the only character but he should be the primary focus and any other characters probably shouldn’t be speaking English. That’s how “Hawkeye” worked and we’re trying to think of similiar experimental episodes for the rest of the characters.

I’ll be honest. I saved Henry until the very end because I could not think of an idea for an episode in which he’s the focus. It’s not that I don’t think McLean Stevenson could’ve pulled off being the only actor (or the only actor speaking English) in an episode of M*A*S*H. Nor do I think Henry is a weak character. I just couldn’t come up with any possible scenarios.

Then it hit me. Henry’s lectures. It’s the perfect way to make Henry the focus of an episode. He’s in the Mess Tent, which is filled to the brim with officers and/or enlisted personnel, and he has to deliver a lecture about something he doesn’t understand. To make it even more difficult for him, Radar is either on leave or otherwise occupied. Henry doesn’t have his company clerk to help out.

Do I think this is a brilliant idea? No. Do I think McLean Stevenson could’ve made it work? Absolutely. Would it have been a good episode? Probably not. If we’re generous and assume Henry needed a few minutes to awkwardly introduce the lecture and another few minutes to wrap things up, we’re left with roughly 20 minutes to fill. That’s a long time to listen to Henry lecture, regardless of the topic.

However, it’s the only idea I’ve come up with for Henry.

3 Replies to “Discuss: Imagine an Episode With Only Henry”