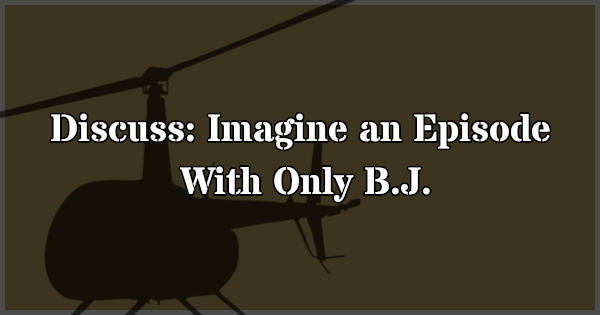 Today’s topic is: Imagine an episode with only B.J.

We’re in the eighth week of our “Imagine an Episode with Only…” journey. We’ve already imagined episodes with only Margaret, Colonel Potter, Trapper, Father Mulcahy, Frank, Radar, and Charles. Today, let’s share our ideas for an episode featuring B.J. He doesn’t have to be literally the only character but he should be the primary focus and any other characters probably shouldn’t be speaking English. That’s how “Hawkeye” worked and we’re trying to think of similiar experimental episodes for the rest of the characters.

It should come as no surprise that my idea for a B.J. episode involves him missing his family. Like some of my other ideas, the it could work just as easily for some of the other characters but I like it best for B.J. He’s alone in the Swamp with a package from his family. Inside is an audio tape. He’s excited to finally have time (and solitude) to listen to the recording using Charles’s reel-to-reel player. For the benefit of the audience, he reads the letter out loud. It basically says his wife borrowed a neighbor’s tape recorder to make a tape for B.J. so he can listen to Erin babbling.

Unfortunately for B.J., something went wrong. He starts playing the tape and there’s static–and nothing else. Not Peg’s voice, not Erin’s voice. Nothing. He’s devastated.

He finds a reel of audio tape on Charles’s desk and starts his own recording, telling Peg and Erin how much he misses them, imagining what they’re life will be like when he comes home from Korea. He talks about his friendships at the 4077th but is careful not to say anything that might upset his wife.

There’s a twist at the end of the episode. When B.J. goes to play back the start of his tape, he only hears static. With a laugh, he picks up a pencil and starts writing a letter home.

It’s a simple idea, similiar to the various letter home episodes, but one that requires viewers to sit and listen to B.J. talk about his family for an entire episode. It’s basically a 25-minute monologue by B.J. about how much he loves his wife and daughter and how much he misses them. It’s possible an episode like this would be boring to watch.

2 Replies to “Discuss: Imagine an Episode With Only B.J.”