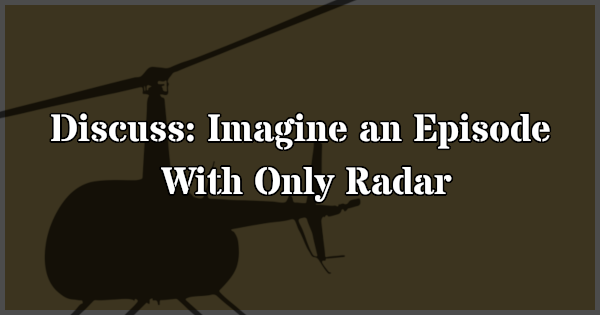 Today’s topic is: Imagine an episode with only Radar.

We’re in the sixth week of our “Imagine an Episode with Only…” journey. We’ve already imagined episodes with only Margaret, Colonel Potter, Trapper, Father Mulcahy, and Frank. Today, let’s share our ideas for an episode featuring Radar. He doesn’t have to be literally the only character but he should be the primary focus and any other characters probably shouldn’t be speaking English. That’s how “Hawkeye” worked and we’re trying to think of similiar experimental episodes for the rest of the characters.

The first thing to think about when trying to come up with an idea for an episode featuring Radar is to decide which version of Radar to use. The scheming Radar from the early seasons who smoked cigars or the naive, innocent Radar who came later? I’ve come up with ideas for both versions of Radar, actually. Would either have succeeded as an episode of M*A*S*H? I’m not so sure.

My idea for an episode featuring Radar from the first few seasons involves Radar’s unique talent for knowing what’s about to happen or what someone’s going to ask him. That’s how the episode avoids conversations with other characters. Radar already knows what they’re going to say, so he answers before they can open their mouth and then he rushes off.

For example, the episode could start with a poker game. Radar suddenly tells everyone choppers are incoming, then immediately leaves the tent to make sure Henry is awake or dressed or otherwise reading for surgery. As the episode progresses, Radar will run from one end of camp to the other, making sure everything is where it should be and everyone has what they need.

I like this idea, even if it seems difficult to film. Radar’s ESP ability worked best in small doses. An entire episode of him cutting people off before they can ask him a question may have become repetitive or even annoying.

My idea for an episode featuring the naive, innocent Radar also runs the risk of feeling repetitive and annoying. The entire episode revolves around Radar and his animals. He spends an entire day with his animals, talking to them and feeding them and telling them about the latest goings-on at the 4077th.

3 Replies to “Discuss: Imagine an Episode With Only Radar”