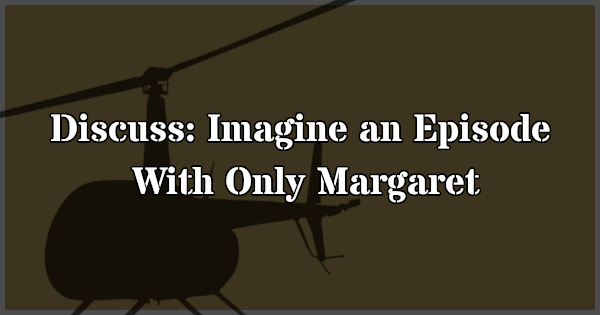 Today’s topic is: Imagine an episode with only Margaret.

Two weeks ago, we discussed whether the Season 4 episode “Hawkeye” could have worked with a different character. That made me wonder what episodes focusing exclusively on other characters would be like. Rather than try to fit Trapper or Charles or Radar into “Hawkeye,” why not imagine an episode in which Trapper is basically the only character? Or Charles. Or Radar. Or any main character other than Hawkeye.

So, starting today, that’s what we’re going to do for the next ten weeks. I’ll pick a character at random and ask readers to share their ideas for an episode in which that character is either the only character or, like in “Hawkeye” the only character speaking English. Will these discussions quickly become repetitive, with the same few concepts used and reused with character after character? Perhaps. But I’m confident there will be some interesting ideas for each character.

We’re kicking things off with Margaret. In my imaginary episode, she’s alone in Radar’s office on the phone talking to Donald. We only hear her side of the conversation. I’m sure there are plenty of ways to keep her isolated. Maybe it’s late at night and she’s thrown Radar out so she can have some privacy. Maybe she threatened anyone who dared step inside while she’s still on the phone.

8 Replies to “Discuss: Imagine an Episode With Only Margaret”