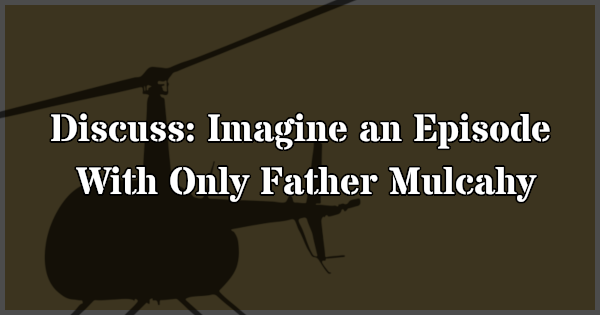 Today’s topic is: Imagine an episode with only Father Mulcahy.

We’re in the fourth week of our “Imagine an Episode with Only…” journey. We’ve already imagined episodes with only Margaret, Colonel Potter, and Trapper. Today, let’s share our ideas for an episode featuring Father Mulcahy. He doesn’t have to be literally the only character but he should be the primary focus and any other characters probably shouldn’t be speaking English. That’s how “Hawkeye” worked and we’re trying to think of similiar experimental episodes for the rest of the characters.

Then I realized M*A*S*H actually came up with the perfect situation for Father Mulcahy in “Goodbye, Farewell and Amen” when he lost his hearing. If that had happened earlier in the series, there could’ve been an episode in which Father Mulcahy can’t hear anyone and can’t interact with anyone without writing down what he wants to say. (Imagine the possibilities if Father Mulcahy had lost his hearing at the start of Season 11 and the entire final season saw him coming to grips with his new reality.)

10 Replies to “Discuss: Imagine an Episode With Only Father Mulcahy”