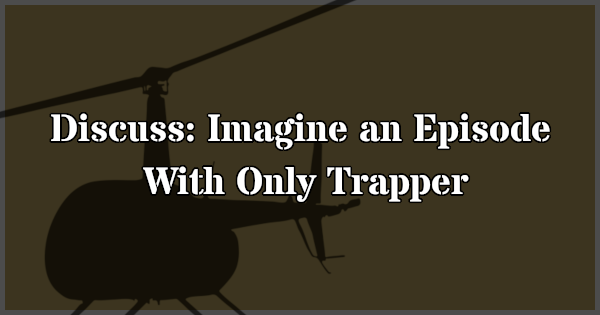 Today’s topic is: Imagine an episode with only Trapper.

We’re in the third week of our “Imagine an Episode with Only…” journey. We’ve already imagined episodes with only Margaret and Potter. Today, let’s share our ideas for an episode featuring Trapper. He doesn’t have to be literally the only character but he should be the primary focus and any other characters probably shouldn’t be speaking English. That’s how “Hawkeye” worked and we’re trying to think of similiar experimental episodes for the rest of the characters.

I think the perfect way to isolate Trapper would be to somehow trap him in the supply room. Ideally, he’d be stuck waiting for rescue with at least one other person but that person is either unconscious or doesn’t speak English.

Maybe Trapper was in the supply room with a nurse when the camp came under enemy fire, which is exactly what happened to Trapper and Margaret in “Bombed” during Season 3. Only this time, the nurse is knocked out and Trapper has to wait for rescue with no one to talk to.

Or maybe Trapper was in giving a South Korean doctor who doesn’t speak English a tour of the 4077th and the doctor’s translator is the one knocked out. Trapper and the doctor have to work together to free themselves without being able to communicate.

10 Replies to “Discuss: Imagine an Episode With Only Trapper”