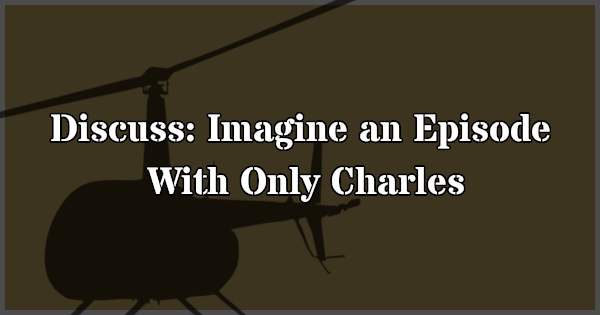 Today’s topic is: Imagine an episode with only Charles.

A Snob with a Heart

We’re in the seventh week of our “Imagine an Episode with Only…” journey. We’ve already imagined episodes with only Margaret, Colonel Potter, Trapper, Father Mulcahy, Frank, and Radar. Today, let’s share our ideas for an episode featuring Charles. He doesn’t have to be literally the only character but he should be the primary focus and any other characters probably shouldn’t be speaking English. That’s how “Hawkeye” worked and we’re trying to think of similiar experimental episodes for the rest of the characters.

My idea for an episode featuring Charles is simple, if unrealistic. Charles is stuck in Post Op all night long, watching over a particularly ill soldier who isn’t responding to treatment. The soldier is unconscious and, for some reason, is the only patient in Post Op, which is otherwise empty. Charles came prepared with his record player and several books, plus refreshments. At first, he’s content to listen to music or read but before long, he can’t stand being alone in Post Op. He starts talking to the unconscious soldier.

Perhaps the episode takes place shortly after Charles is transferred to the 4077th, and he shares his frustrations and fears with the soldier, allowing viewers to learn a little about Charles.

To be honest, I can’t think of any reason why Charles would be alone in Post Op or why a nurse wouldn’t be tasked with keeping a close eye on the recovering soldier. Perhaps several nurses are sick or otherwise unavailable, and Charles is the unlucky doctor chosen to spend the night babysitting the sick patient. Like many of my ideas, this could work for just about any of the characters, but I like the concept best for Charles. I can picture him pacing back and forth, ranting and raving about the injustice of his situation, only to eventually realize how fortunate he is compared to the soldier, who may not make it home.

5 Replies to “Discuss: Imagine an Episode With Only Charles”