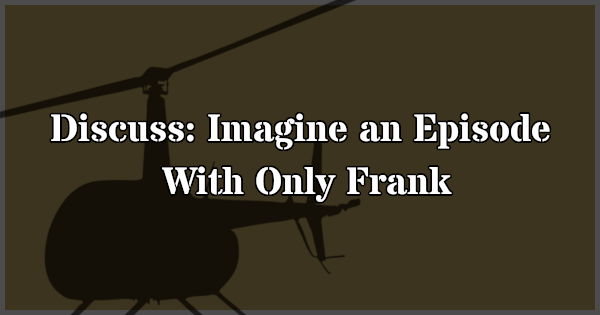 Today’s topic is: Imagine an episode with only Frank.

The Interrogation of Major Frank Burns

We’re in the fifth week of our “Imagine an Episode with Only…” journey. We’ve already imagined episodes with only Margaret, Colonel Potter, Trapper, and Father Mulcahy. Today, let’s share our ideas for an episode featuring Frank. He doesn’t have to be literally the only character but he should be the primary focus and any other characters probably shouldn’t be speaking English. That’s how “Hawkeye” worked and we’re trying to think of similiar experimental episodes for the rest of the characters.

I had a lot of trouble coming up with ideas for an episode with only Frank in it. Why? Because nobody wants to watch an episode of M*A*S*H that’s little more than 25 minutes of Frank whining. The only possible scenario I can think of is an episode in which Frank has been captured by either the North Koreans or the Chinese and is being interrogated. Let’s be kind and assume Frank initially refuses to provide any information other than his name, rank, and serial number.

It doesn’t take long before Frank begins blabbering. Maybe an unseen voice will ask questions for Frank to answer. Or maybe he’ll hear questions the audience doesn’t hear and respond to them. He’ll alternate between trying to please his captors by making himself sound important and downplaying his rank and ability in the hopes of being released.

To be honest, I’m not convinced an episode like the one I’m describing would’ve work very well. Larry Linville was a talented actor but I’m not sure he could’ve pulled off 25 minutes of Frank groveling.

8 Replies to “Discuss: Imagine an Episode With Only Frank”