Capsule Summary: Mail call brings bad news to Klinger and worries to B.J. while Hawkeye gets another man’s love letters.

This was the third and final episode to have mail call in the title (after “Mail Call” from Season 2 and “Mail Call Again” from Season 4) but by no means was it the last episode to involve character’s receiving letters from home. There’s no real storyline to this episode, just plot points involving every single character, some tied together and most involving mail. For all intents and purposes this was an episode about Klinger and B.J. with a little bit of Hawkeye and Radar thrown in for good measure.

It’s unclear how long Klinger was married to Laverne. The wedding took place over the phone during “Springtime” in Season 3. Given the impossible timeline of the series, it’s possible the two were only married for a few months. I wish more attention had been given to the fact that nobody believed Klinger when he said Laverne wanted a divorce, although to be fair apparently Klinger had made the claim in the past. His plea in front of the entire camp (“I want somebody to listen to me.”) revealed the depth of his pain, both at the divorce and the fact that he had become the boy who cried wolf.

Likewise, we don’t know just how long B.J. has been away from Peg by this point in the series. Has it been a few months? Half a year? More? He always missed her but this time there was something more. He wasn’t so much worried about her having to deal with plumbing or the car and his anger wasn’t just that a good neighbor made a pass at her. No, he was terrified that Peg would realize she didn’t need him, that she could fend for herself just fine. While that may seem somewhat sexist, I’m sure it was a very real fear for soldiers in the 1950s.

Together, Klinger and B.J.’s plot points felt a little reminiscent of Trapper nearly going AWOL in “Mail Call” during Season 2.

Part of me wishes that Hawkeye getting another Benjamin Pierce’s mail had been a larger plotline in another episode. There was a lot of potential and I don’t think it was fully reached here. Sure, the other Benjamin Pierce was interesting, what with his monotone, humorless demeanor at odds with the way he made all the ladies laugh. It just wasn’t as developed as I would have liked.

The best part of Radar’s plot point was Hawkeye’s story about how as a 12-year-old he kept his father from marrying and being happy because he was jealous of his father’s interest in a bookkeeper. I’m sure there are some fan written stories out there in which Hawkeye’s father romanced Radar’s mother.

Colonel Potter and Father Mulcahy both received mail but it was only incidental. They were heavily involved in Klinger’s plotline. Charles and his joy at the loss of 40% of the Missouri sorghum crop due to hail was funny. He popped up in several other plotlines, including Margaret’s which felt totally out of place and had no resolution. 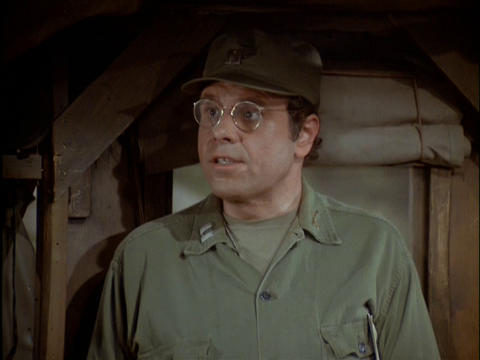 The other Benjamin Pierce is a very funny guy

Did anyone else find Charles checking out Margaret’s rear end in the supply tent disturbing?

Speaking of Margaret, why wasn’t she in the final scene at the Officers’ Club? Everyone else was.

Was this the only episode in which Radar’s teddy bear squeaked?

Jack Grapes played mail delivery man Kelsey in this episode. It seems odd that such a small character would be given a name.

This was the second episode to guest star Oliver Clark. He earlier played Hawkeye’s friend Lt. Tippy Brooks in Season 5’s “37 Across.”