Capsule Summary: A constant flow of wounded to the 4077th leads to shortages of supplies like plasma and gloves.

This is an interesting episode due the inclusion of black and white footage from Fox Movietone News newsreels, without which it would have been a fairly mundane story about too many wounded. The use of the newsreel footage adds a lot to the episode, giving viewers a glimpse at what (and how) the general public in the early 1950s learned about what was going on in Korea. It feels a little disjointed at times but overall works well.

Would you believe that the episode wasn’t planned to include newsreel footage? According to Larry Gelbart, the decision to use newsreel footage was made after the episode had been filmed and the producers discovered that it ran short. Gelbart discussed the episode a number of times at the alt.tv.mash Newsgroup.

Although we used snippets of newsreel footage in several shows, “Deluge” was the first episode first time we used such material as the glue for a show.

In fact, it was only after we shot the episode and found that we really didn’t have enough for the 24 minutes and 20 seconds that the show ran that we decided the only way to bulk it up (shooting more original material would have been impossible) was to buy archival footage (none of that stuff is ever free) and splice it between our own filmed sequences.

We lucked out. We edited so much material out of the shot footage for a script entitled “Deluge” – which was never meant to alternate scenes at the 4077th with newsreel stuff — that we were minutes short of having a show to go on the air. So we added all the black and white stuff.

Forget what the episode was originally entitled. but when Reynolds and I timed the final cut, we realized that we did not have enough show. I forget whose idea it was, but we decided to insert bits of actual newsreel footage to add to the correct timing for the show’s content (26.20), started combing over available newsreel stuff, intercut it with what we formerly shot and that was it.

All sounds so simple now. Probably was then, too. We were a pretty well-oiled operation at that point in the series’ life.

If at times the use of newsreel footage feels like an afterthought, that’s because it was.

As for the episode itself, there isn’t much of a plot. The 4077th is inundated with casualties and everyone is under a lot of stress. Lots of little things happen. Radar breaks his glasses and has to wheel and deal for plasma. Hawkeye leaves a sponge in a patient, prompting Frank to gleefully make fun of him. Hawkeye and B.J. operate underwater on a soldier with phosphorous burns. The O.R. runs out of gloves and the doctors have to operate with bare hands.

Also, Klinger complains about being in the Army and reveals how he tried to convince everyone he was crazy. A fire starts in a laundry bin outside the O.R. and Klinger and Radar work together to put it out (“the blind leading the blind” in the words of Frank). Due to rain, there are leaks all over camp. The 4077th is bombed and the windows to the O.R. are blown out. Ultimately, the 4077th receives a meritorious unit commendation for its service during the deluge. 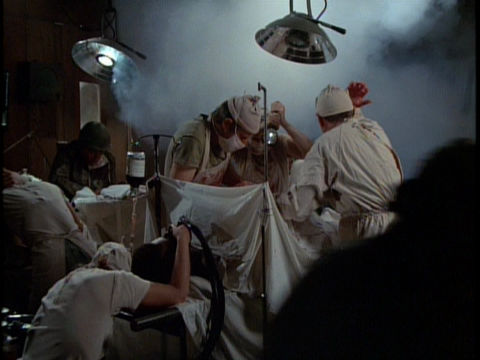 “Deluge” also sees the Chinese enter the Korean conflict, which means the episode takes place in late November 1950. Colonel Potter considers evacuating the nurses but Margaret will have none of it. She didn’t put up much of a fight in Season Three’s “There Is Nothing Like A Nurse” (which coincidentally I reviewed last week) when the nurses were evacuated. I’m surprised Potter had the power to say if the nurses were evaluated or not. I would have thought that would have been decided higher up the food chain.

Just before the O.R. is bombed, a light bulb explodes over B.J.’s operating table. Frank jumps into action, running over to help. It’s a rare example of him actually being a good doctor.

When Colonel Potters walks in on Margaret showering, if you look closely you can see that Loretta Swit isn’t actually naked.

What’s your favorite bit of newsreel footage used in this episode? I think we can all agree that Dagwood the ping-pong playing cat is pretty cool.