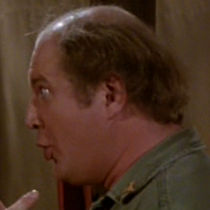 Capsule Summary: Charles and B.J. clash while writing a paper for a prestigious medical journal. Meanwhile, Margaret reunites with Scully and discovers he might not be the man for her.

This is the 156th episode I’ve reviewed as part of my Episode Spotlight series. I meant to make note of the 151st episode but my spreadsheet was out-of-date so I’m mentioning it now. There are 95 episodes left to go.

It’s too bad neither of the storylines in this episode heavily involve Hawkeye. Not that I think he needs to be featured in every episode. I liked his involvement in Margaret’s storyline but he didn’t add much to the Charles/B.J. storyline. Unfortunately, because he wasn’t a featured player in either the A Story or the B Story, Hawkeye was given his own minor C Story that felt forced.

Because it came up first, I’m calling Charles and B.J. writing their journal article the A Story. It works pretty well even though it’s obvious from start to finish. Of course the two were going to argue about who deserved more and of course they were going to eventually apologize and agree to work together. It’s not surprising that Charles would act like such a pompous ass nor is it surprising that B.J. would react the way he did when he felt his contributions were being overlooked.

Margaret’s B Story was full of callbacks to earlier episodes. She mentions both Frank and Donald while Hawkeye referred to Carlye Breslin, the woman he loved in med school who visited the 4077th in “The More I See You” during Season 5. When Margaret is discussing the men in her life, she includes Hawkeye but it’s not clear whether she’s referring to the events in “Comrades in Arms” (Parts 1 and 2) or more generally their initially antagonistic relationship.

The deep disconnect between Margaret and Scully wasn’t a problem in either of his previous appearances (in “A Night at Rosie’s” and “Guerrilla My Dreams”) so I’m not sure why it immediately erupted here. I can’t recall offhand whether Scully was disrespectful of Margaret’s rank and accomplishments in those earlier episodes but it felt like it came out of nowhere here.

Hawkeye’s battle against boredom was strung throughout the episode. It was mentioned during the staff meeting at the start of the episode and he certainly seemed desperate to get involved with Charles and B.J.’s paper and later begged Scully to have a drink with him. These were fine. Trying to engage Father Mulcahy in a conversation about jeeps was pointless and served only to give William Christopher something to do. Klinger’s role in the episode was minor but fit a little better.

The Officers’ Club was pretty dead in this episode. Actually, the entire camp seemed really empty. No wonder Hawkeye was bored out of his mind.

Klinger’s dress collection is seen in this episode although he himself doesn’t wear any dresses.

This was the fifth of nine episodes directed by Harry Morgan.

The producing, writing, and directing credits after the opening credits are at the bottom of the screen rather than the center and appear to be in a slightly lighter shade of yellow.