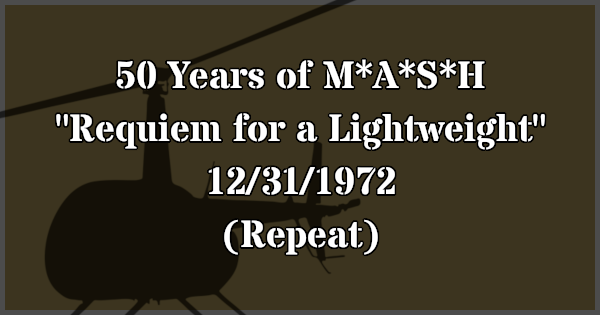 The very first network prime time repeat of M*A*S*H aired 50 years ago today. CBS rebroadcast “Requiem for a Lightweight” on Sunday, December 31st, 1972 on CBS. Why did the network decide to repeat the third episode rather than the first episode? I don’t know.

In order to keep Major Houlihan from transferring a pretty nurse, Trapper agrees to enter a boxing competition with Hawkeye as his trainer.

“Requiem for a Lightweight” marked the first appearance of William Christopher as Father Mulcahy. It was also the first of six episodes guest starring Marcia Strassman as Nurse Margie Cutler and the first of two episodes featuring Sorrell Booke as General Barker. It was one of 20 episodes included in The Hallmark Channel’s “M*A*S*H Bash 2007,” hosted by Wayne Rogers. The 12-hour marathon aired Monday, January 1st, 2007.

MeTV aired “Requiem for a Lightweight” in January 2016 as part of a tribute to Wayne Rogers, who died December 31st, 2015.