Capsule Summary: In order to keep Major Houlihan from transferring a pretty nurse, Trapper agrees to enter a boxing competition with Hawkeye as his trainer.

This episode marked the first broadcast appearance of William Christopher as Father Mulcahy, replacing George Morgan who played the character in the pilot episode. But because this was the eighth episode produced despite being the third aired, it was not Christopher’s first work as Mulcahy. He actually appeared in the second episode produced (“Henry, Please Come Home,” aired ninth) as well as the sixth episode produced (“I Hate a Mystery,” aired tenth).

Also appearing for the first time in this episode is Marcia Strassman as the lovely Nurse Margie Cutler. She would make a total of six guest appearances during Season One. I’m a big fan of Strassman, who after her recurring role on M*A*S*H ended went on to co-star on ABC’s Welcome Back, Kotter from 1975 to 1979. Finally, Sorrell Booke made the first of two appearances as General Barker (the second being “Chief Surgeon Who?” which was produced before this episode but aired after it). He, too, went on to greater fame years later playing Boss Hogg on The Dukes of Hazzard from 1979 to 1985.

The plot of the episode is a little thin. Why would Margaret transfer Margie, a perfectly competent nurse, just because Hawkeye and Trapper were falling all over themselves trying to compete for her affection? If she transferred every nurse the two lusted after, she’d have a pretty small staff. And if Colonel Blake couldn’t do anything about Margie because Margaret was in charge of the nurses, what exactly did he do after the boxing match to get her back to the 4077th?

Still, there’s so much to love about this episode that the logic behind the story is easy enough to ignore. I’m not sure where to start. How about Margie’s introduction? She rushes out of the shower in a towel, knocking Radar over in the process, and runs into Hawkeye and Trapper who are immediately smitten. She then somewhat unbelievably loses the towel and runs off naked, prompting Hawkeye and Trapper to salute in appreciation. It’s quite the debut.

Also: Trapper and Hawkeye racing to Margie’s tent (yet another example of an unexplained single occupancy tent), destroying Frank’s new garden in the process; Ugly John passing out after explaining the old ether-on-the-boxing-glove trick; Trapper explaining he’s a doctor to Sgt. Flacker; and Margaret screaming after Flacker falls on her and Frank.

Speaking of Frank and Margaret, their little scheme to switch the ether with distilled water and ruin Hawkeye’s plan would have backfired pretty badly had Trapper been seriously hurt. I doubt they wanted that but I also doubt either of them thought things through before acting. 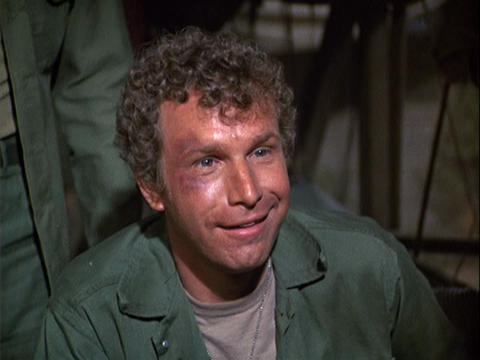 Kid Doctor wins in the end

There’s some over-the-top laughter in this episode. First when Trapper is leaving Colonel Blake’s office after learning about the boxing competition and later in the Mess Tent when Blake reacts to Hawkeye’s promise that Trapper will win the fight.

At the start of the episode, when the PA calls for all shifts to the operating room, it’s obvious that all the background actors were waiting for their cue to start rushing across the compound. Those that burst out of the Mess Tent were no doubt waiting in front of the door rather than seated at tables eating. They run out too quickly, some with surgical gowns already half on.

If you look closely, you can see two nurses in bathrobes running across the compound before we see four nurses run out of the shower tent in bathrobes, followed by Margie in her towel. That’s a lot of nurses waiting in line for the showers.

The first half of this episode, particularly any outdoor scenes, are lit very softly. There’s almost a glow around the characters.

13 Replies to “Episode Spotlight: Requiem for a Lightweight”