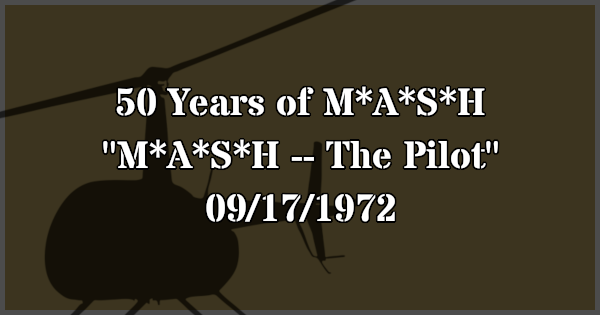 The very first episode of M*A*S*H aired 50 years ago today. “M*A*S*H — The Pilot,” the series premiere of M*A*S*H, aired for the first time on Sunday, September 17th, 1972 on CBS. Aside from television and radio promos, print advertisements, and other promotional material, this was the first opportunity for viewers to sample M*A*S*H. It’s an unusual episode, one that feels slightly different than the rest of the first season. One big difference? Father Mulcahy is played by George Morgan, not William Christopher.

Hawkeye and Trapper need to raise money to send Ho-Jon to college in the States so they hold a raffle.

I’ve written about “M*A*S*H — The Pilot” multiple times over the years. Here are some posts that may be of interest: