Capsule Summary: Hawkeye and Trapper need to raise money to send Ho-Jon to college in the States so they hold a raffle.

More has been written about the pilot episode of M*A*S*H than any other episode, with the possible exceptions of “Goodbye, Farewell and Amen” or “The Interview.” For some (but not all) M*A*S*H fans it was their first introduction to the series, its characters and its locales.

Sometimes I wish I could experience watching this episode without having seen any other episodes of M*A*S*H, to find out how good a job it did establishing the characters and their situations. It’s impossible to watch it without being influenced by later episodes but I think many of the characters are given just enough time to exhibit one or two traits that would be fleshed out later in the series.

We know that Hawkeye, for example, is obviously anti-authority and a skirt-chaser. Based on his reaction to the letter he receives from his wife, we see that Trapper is very open about cheating on her (in fact, some might say he seems a little cruel about it). Likewise, we know that Radar has some sort of power of precognition and that Colonel Blake isn’t usually a stickler for rules. And we can clearly tell that Frank and Margaret are in a relationship and that both are arrogant and like throw around their authority.

The plot is relatively simple, which for a pilot episode is a good idea. There’s a nice beginning, middle, and end to the episode, which revolves primarily around the raffle for Ho-Jon but later Hawkeye and Trapper nearly being arrested. For the most part it’s a silly episode but there’s a serious undertone involving wounded Canadians.

(Despite the success of the raffle, Ho-Jon didn’t leave for college immediately but stuck around the 4077th, perhaps waiting until the fall semester got underway.) 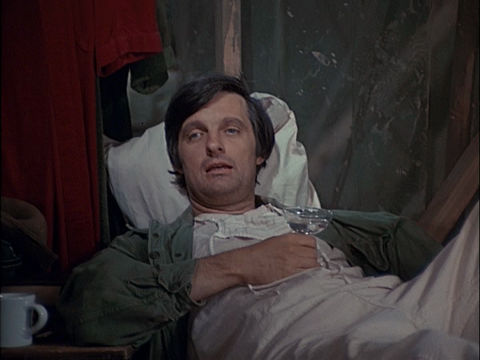 “M*A*S*H — The Pilot” features a number of influences from the original novel. The basic plot is taken from the novel, as is Hawkeye’s catchphrase “finest kind” (used only once or twice after this episode). Hawkeye’s hat is a holdover from the film and may have been referenced in the novel. Trapper refers to Father Mulcahy as Red, short for Dago Red which was his nickname in the novel. And Hawkeye refers to “the Painless Pole” when counting raffle money, a character from the novel and the film.

The closing credits include an Executive Consultant credit for Ingo Preminger (producer of the 1969 film MASH) and a Based on the Novel by credit for Richard Hooker (who wrote the 1968 novel).

In a February 2001 post to the alt.tv.mash newsgroup, Larry Gelbart had this to say about influences from the novel and Preminger’s involvement:

I was constantly going back to the novel in the early days of the series, for story ideas, haracters [sic], language, phrases, etc. Less and less, obviously, as time went by.

Whatever Mr. Preminger’s billing (credit) was he truly had nothing whatsoever to do withg [sic] the series.

The pilot episode also includes a number of unique elements never seen again, including scenes before the opening credits, an extended opening credits sequence, and a library at the 4077th.

In January 2004, Larry Gelbart explained what the text “KOREA, 1950, a hundred years ago” displayed at the start of the episode meant:

I wrote the line to indicate how long ago the Korean War seemed in the minds of the American public.

Most of the minor supporting characters introduced in “M*A*S*H — The Pilot” would stay with the show for at least part of Season 1, including Ho-Jon, Spearchucker, Ugly John, and Leslie Scorch. Boone would reappear in three additional episodes, General Hammond in two, and Lt. Dish in just one. Ginger would remain with the series through Season 3.

Laura Miller is credited as Knocko (a character from the novel and the film) but I have no idea where in the episode the character appears.