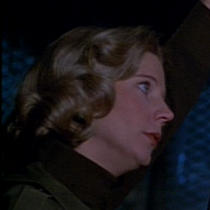 Capsule Summary: An old flame of Hawkeye’s shows up at the 4077th and the two rekindle their romance.

This is not a funny episode. It’s a tragic one in which Hawkeye gets his heart broken again by the only woman he apparently ever truly loved. For some viewers, learning about his history with Carlye helps put his constant womanizing (particularly during the first three seasons) into perspective. Others may consider the episode too mushy.

The timeline of this episode is unclear. During his conversation with B.J. in Radar’s office, Hawkeye says, “I haven’t been home much the past few weeks,” suggesting his affair with Carlye went on for quite some time before Carlye decided to run away. But we don’t see any of it. We’re shown Carlye arriving at the 4077th, running into Hawkeye, talking about their past, working together in the O.R., and finally talking again and kissing.

Suddenly, it’s weeks later. Hawkeye and Carlye have presumably been together the entire time. Hawkeye is happy, Carlye is not. She’s fallen in love with Hawkeye again but being unfaithful to her husband bothers her so much she puts in for a transfer. Hawkeye can’t understand what’s happening. “I’ve always been honest with Doug,” Carlye says. “So don’t stop!” Hawkeye tells her. “He’ll want a divorce,” Carlye responds. That’s fine with Hawkeye. They can finally be together. He even proposes, sort of.

But Carlye knows better. She knows Hawkeye has “just proposed himself into a corner.” She knows Hawkeye is too busy being married to his career and medicine. It’s what broke them up before. Nothing has changed, especially not the way they feel about one another. So, Carlye leaves. Does she stayed married to Doug? Perhaps. Does Hawkeye ever get over Carlye? Doubtful, although she’s never mentioned again.

B.J. makes a big speech about fidelity and how he’ll never cheat on Peg. He doesn’t judge Hawkeye. Later episodes depict his struggle to stay faithful: “Hanky Panky” during Season 5 and “War Co-Respondent” during Season 8.

There are no true subplots in this episode, just short vignettes featuring other characters, included to keep this from focusing too heavily on Hawkeye. B.J. plays a big role in the Hawkeye/Carlyle story with his big speech about staying faithful to Peg. We see Colonel Potter painting, Radar doing his impersonations, and Father Mulcahy worrying about typos in The Bible.

Nurse Becky Anderson has almost not impact on the episode. She jokes around with Carlye about Hawkeye and B.J. and then disappears.

I love the “bored” exchange between Hawkeye and B.J. at the start of the episode:

Hawkeye: “File this under M.P., Medical Profile.”
B.J.: “Or Military Police.”
Hawkeye: “Or Member of Parliament.”
B.J.: “Or Married Person.

I have to believe this was intentional on the part of scriptwriters Gelbart and Reynolds, intended to reinforce the friendship between Hawkeye and B.J. 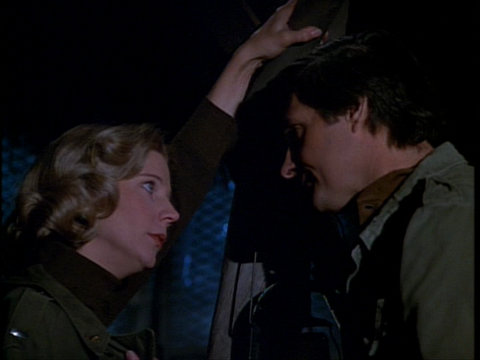 Larry Gelbart discussed “The More I See You” in a handful of posts to the alt.tv.mast Usenet group. In a June 1998 post, he had this to say about the episode:

Half way through writing the script for this episode – “The More I See You” – the whole idea suggesting itself merely by remembering the song of the same title, as sung by Alice Faye in an old Fox movie – the idea of Bythe Danner popped up and from that moment no one else would do.

Only problem was, she didn’t do half hour shows and we didn’t yet have a script to show her.

Gene Reynolds got her on the phone and we both made a very strong pitch to her, promising the part would be worthy of her talent.

She took a chance, not seeing a word on paper.

She was divine on the show.

It’s still a personal favorite of mine.

In a September 2004 post, he answered a question about Hawkeye’s “regical surgency” line at the beginning of the episode:

As 1 [sic] recall that was written as a deliberate spoonerism that was meant to show how thrown Hawkeye was, having Carlye pop up in his life after so long an absence.

The song this episode is named after, “The More I See You,” starts playing in the Swamp shortly after Carlye and Becky get out of their jeep. Harry Warren composed the song while Mack Gordon wrote the lyrics. During Radar’s impersonation of Al Jolson, he mentions Harry Warren.

Speaking of impersonations, Radar as a turtle is hilarious. I wonder if Gelbart and Reynolds, while writing the script, asked Gary Burghoff what animal he could convincingly impersonate, or if they decided on a turtle and Burghoff had to figure out how to pull off the impersonation.

Mary Jo Catlett, who plays Nurse Becky Anderson in this episode, resurfaced in “The Nurses” during Season 5 as Nurse Walsh. She also co-starred in an unsold 1977 CBS pilot called “Handle With Care,” about two nurses during the Korean War.

This is the first episode in which Colonel Potter is seen painting. He finishes two paintings: one of Radar and one of Klinger.

Margaret and Frank do not appear in this episode.

11 Replies to “Episode Spotlight: The More I See You”