Capsule Summary: Hawkeye and B.J. handle a number of unofficial requests for help, including a general who needs penicillin and a sergeant who wants to ship home enough equipment to start a restaurant.

I don’t really have much to say about this episode, truth be told. There’s nothing wrong with, nothing to criticize or complain about. Neither is there anything particularly noteworthy. It’s a regular, run-of-the-mill early Season Four episode. A solid episode. A good episode. And sometimes that’s enough.

The highlight of the episode for me is the wild tank ride of Frank Burns. He certainly looks gleeful driving the tank through the camp, destroying tents and crushing tents. At least at first.

Its obviously not the Swamp that Frank drives through, although the signpost has been placed in front of it to suggest it is. If you look carefully as B.J. is diving through the side of the tent, you’ll notice it’s absolutely empty other than the chairs and table. No mention was made of the Still being destroyed by the tank. 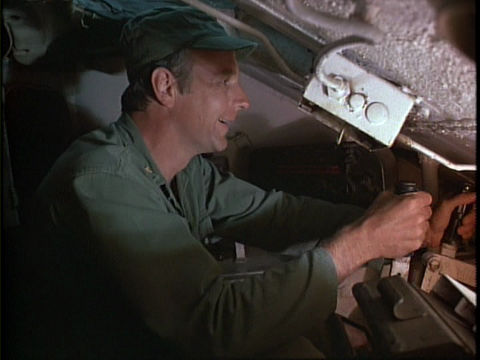 Frank in the Tank

Of the three requests for help that gave the episode its title, Sergeant Kimble’s plea for his medical record to be changed so he could take a ship home was given the most screen time. When Hawkeye and B.J. first approached Frank to sign the papers for Kimble, I was a little surprised that Margaret didn’t suggest he do it in order to get the microscope.