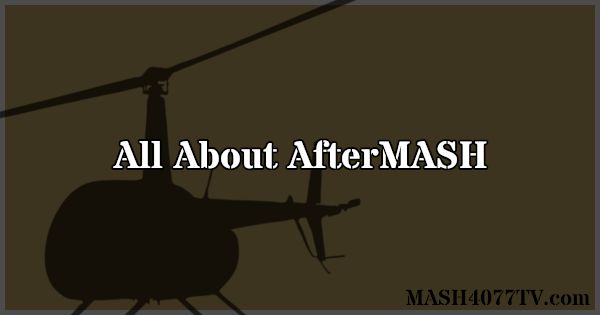 With input and inspiration from David Goehner.

AfterMASH can be considered a spin-off of M*A*S*H, or a sequel, or a continuation, or all of the above. Like M*A*S*H, it was a half-hour sitcom aired on CBS. Unlike M*A*S*H, it was never well-received by critics. And although the first season was highly rated, AfterMASH was unable to draw as many viewers as M*A*S*H had. A total of thirty-one episodes were produced but only thirty were broadcast. The final episode, which was not a proper series finale, has never been aired.

The idea for AfterMASH was born as M*A*S*H was coming to an end. In February of 1983, during the media frenzy over the anticipated and movie-length series finale of M*A*S*H, the first reports of a spin-off began circulating. The key facts: it would be set after the war at a stateside veteran’s hospital and would star Harry Morgan, Jamie Farr and William Christopher as Sherman Potter, Maxwell Klinger and Father Mulcahy, respectively. According to a TV Guide article from November of 1983, when the cast of M*A*S*H got together to decide if they wanted to continue for an eleventh season in 1982, Morgan, Farr and Christopher were the three most in favor of continuing. An abbreviated eleventh season would air from 1982 to 1983, ending in February.

But CBS and 20th Century-Fox, the production company behind M*A*S*H, were not keen on seeing the series — and its high ratings — come to an end. For 20th Century-Fox, M*A*S*H was an increasingly valuable source of revenue in the syndicated market. However, with Alan Alda and the majority of the cast wanting to end the show, M*A*S*H ended. Larry Gelbart, who created the television version of M*A*S*H back in 1972, was approached by CBS and 20th Century-Fox to create a new series. Gelbart, of course, left M*A*S*H in 1976 after the conclusion of its fourth season and with his last foray into network television having crash and burned (NBC’s United States in 1980) he was at first reluctant to return to the medium and the universe of M*A*S*H.

“The challenge is all that interests me,” Gelbart told The New York Times in February of 1983. “If I hadn’t felt it was a good idea, I wouldn’t have agreed to do it.” What he agreed to do was develop AfterMASH and pen the first three episodes, calling them a “transition from what was to what will be.” Gelbart would ultimately write more than just those first three episodes.

Burt Metcalfe, who had been with M*A*S*H since the beginning and was serving as executive producer during the final seasons, also signed on for AfterMASH. He brought David Isaacs, Ken Levine and Dennis Koenig along with him, three writers/producers from M*A*S*H. Scripting began in April of 1983. Michael Hirsch (who produced Making M*A*S*H) served as a researcher and came up with some 500 potential story ideas, according to TV Guide. And an article in The Hartford Courant from June of 1983 stated that the price tag for each episode of AfterM*A*S*H was a cool $500,000, supposedly the highest price for a half-hour sitcom ever paid at the time.

By August of 1983, a total of ten scripts were finished, out of thirteen episodes that CBS initially ordered, and casting began. Rosalind Chao, who played Klinger’s Korean wife Soon-Lee in the final episodes of M*A*S*H, was already set to return in AfterMASH. Several new characters, including Colonel Potter’s oft-mentioned but never seen wife, Mildred, were also created. Barbara Townsend was cast as Mildred Potter and John Chappell, Brandis Kemp and Jay O. Sanders were cast as hospital administrator Michael D’Angelo, his secretary Alma Cox and doctor Gene Pfeiffer, respectively. 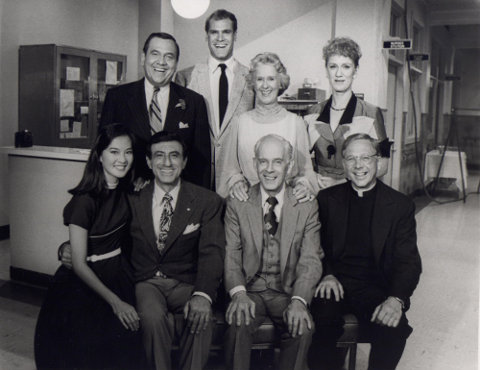 The series was given the Monday at 9:00PM timeslot (all times Eastern) that M*A*S*H had formerly occupied. An hour-long series premiere (two episodes aired back-to-back) was scheduled for September 26th, with a special 8:00PM airtime. On the eve of the premiere, an article in The New York Time quoted Larry Gelbart as saying about his new show, “We are really dealing with men coming home from war, not dealing with men at war.”

CBS kept details of those first two episodes under strict lock and key prior to broadcast and even reviewers were unable to get their hands on any details. The secrecy, coupled with general viewer interest, translated to an impressive 31.0/47 rating, ranking first for the week. According to TV Guide, that was the highest-rated premiere for a new sitcom since Laverne & Shirley bowed on ABC in 1976. The premiere saw Sherman Potter, Maxwell Klinger and Father Mulcahy (no longer deaf thanks to an operation) together again at General Pershing Veterans Administration Hospital (more commonly known as General-General) in River Bend, Missouri in September of 1953.

The following episode, aired October 3rd, slipped to a 37 share, still a very strong performance, and was again ranked first for the week. By November, although the ratings had tapered somewhat, AfterMASH was still performing solidly and CBS picked up the series for the remainder of the season, adding an additional nine episodes to the original order for a total of twenty-two. For the first ten weeks of the 1983-1984 season, AfterMASH was tied with the ABC Sunday Night Movie for the fifth spot on the ratings chart, actually doing better than M*A*S*H was during its last season, according to The Hartford Courant.

On December 5th, 1983, an episode titled “Fallout” was aired. Perhaps the best installment the series had to offer, it was written and directed by Larry Gelbart and saw both Sherman Potter and Dr. Pfeiffer considering leaving General-General. When they stumble upon a connection between the leukemia seen in a patient and exposure to atomic testing, they reconsider. The plight of the “atomic veterans” was, and is, a real one: soldiers who fell ill after being exposed to radiation from atomic tests. The episode, and Larry Gelbart, was nominated for an Emmy Award for Outstanding Directing in a Comedy Series.

In January of 1984, having survived the first half of its freshman season, AfterMASH experienced some growing pains. The character of Dr. Pfeiffer, played by Jay O. Sanders, was phased out “because the character just wasn’t working,” according to TV Guide. A new character, Dr. Boyer, played by David Ackroyd, was introduced in the same episode, which also had a cameo from actor Gary Burghoff as Walter “Radar” O’Reilly. Burghoff had left M*A*S*H at the start of its eighth season.

Burghoff would guest star in the following week’s episode, which dealt with Radar’s upcoming marriage. As Potter, Mulcahy and Klinger prepare to head to Iowa for the wedding, Radar shows up at Potter’s house in Missouri, pre-wedding jitters having gotten the best of him. 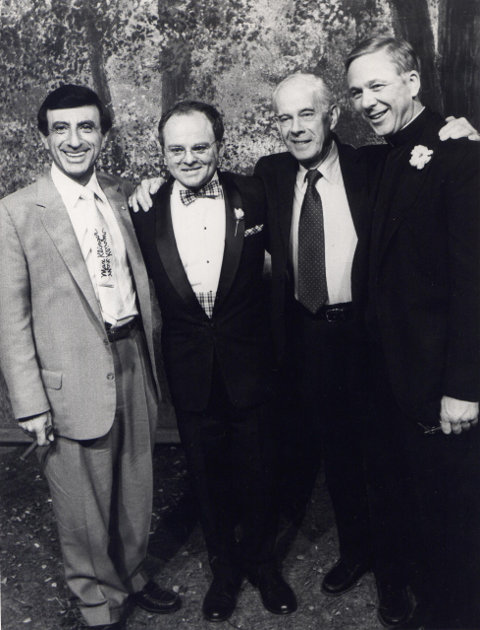 Rumors about Burghoff’s appearance foretelling yet another M*A*S*H spin-off were not exactly true: his guest role on AfterMASH may have “tested” the waters some but it did not serve as a pilot for a potential series (that would have to wait for W*A*L*T*E*R later that year).

AfterMASH ended its first season on March 12th, 1984 with its 22nd episode, in which Klinger tries to buy a house and instead buys himself a ton of trouble. The series was replaced for several weeks before repeats began in late April. CBS announced it was renewing AfterMASH for a second season in early May; however, despite ranking 15th for the season, network executives were not entirely pleased with AfterMASH and instituted several changes.

First and foremost, AfterMASH would be moving to Tuesdays at 8:00PM to serve as “counterprogramming” to NBC’s hit series The A-Team due to its audience skewing older. Additionally, the series would have “more energy, more drama” and would become “more colorful,” according to TV Guide. Klinger would be back in women’s clothing, on the run due to an incident with a realtor at the end of the first season. The character of hospital administrator Michael D’Angelo, played by John Chappel, was replaced by Wally Wainright, played by Peter Michael Goetz.

Furthermore, Mildred Potter would no longer be played by Barbara Townsend. Instead, Anne Pitoniak was brought in to make Mildred “more of a Gracie Allen type.” Potter would now have Alma Cox as his secretary — the two did not get along — and the role of Dr. Boyer would be expanded. All of these changes were made because CBS was trying to “recapture some of the zaniness and desperation of the early years of the original M*A*S*H,” said TV Guide.

The second season premiere aired as a special presentation on Sunday, September 23rd, 1984 at 8:00PM, prior to the 36th Annual Emmy Awards, and did quite well in the ratings. When AfterMASH moved to its regular Tuesday time slot on September 25th, however, the ratings plummeted. Despite Jamie Farr being back in drag, viewers were not tuning in. The October 9th, 1984 episode brought back another familiar face from M*A*S*H, this time Edward Winter as the paranoid Colonel Flagg. Klinger, back in jail, was trying to use insanity as a defense and Flagg was brought in to testify.

All the changes CBS had instituted for the second season — and the increased competition facing The A-Team — were too much for AfterMASH, which was officially cancelled on Wednesday, October 24th, 1984. The series had fallen as low as 66th on the rating charts. Harvey Shephard, senior vice president of programs for CBS Entertainment, told The New York Times that the problem stemmed from a “tendency toward too much heavy drama,” and that the balance between comedy and drama that M*A*S*H had struck eluded AfterMASH.

Executive producer Burt Metcalfe told The Hartford Courant that he thought “there was this inevitable comparison with ‘M.A.S.H.,’ and, naturally, by those standards, we were going to suffer.” He also wondered if viewers were still missing Hawkeye Pierce and actor Alan Alda. In any case, AfterMASH was the first CBS series to be canceled during the 1984-1985 season.

One final episode was broadcast in October and then the series was put on hiatus through November. It returned in December, but only one episode aired. Two more were scheduled to air but were pulled. Almost six months later, on Friday, May 31st, 1985, the final two episodes were supposed to air from 8:00PM to 9:00PM. However, only the first was shown; the second was pulled at the last minute and has never aired.

The unfortunate legacy AfterMASH is left with contends that, nine times out of ten, taking characters from a popular television series and putting them in a spin-off isn’t a very good idea. Prior to AfterMASH, the best example of this phenomenon was probably the high-profile Joanie Loves Chachi, a failed spin-off of Happy Days. Today, AfterMASH serves as the “worst” benchmark for potential television spin-offs, with the successful Frasier (a spin-off of Cheers) holding the distinction of “best” spin-off.

In 2002, TV Guide ranked AfterMASH as one of the ten worst television shows of all time.

77 Replies to “All About AfterMASH”