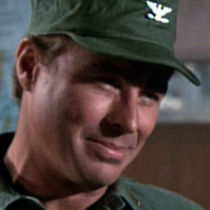 Capsule Summary: Sidney Freedman and Colonel Flagg arrive at the 4077th with different ideas about treating a patient who insists his name is Jesus Christ.

There’s no denying that “Quo Vadis, Captain Chandler?” is a solid episode, perhaps even a great episode. In my mind, that’s because of the interaction between Sidney Freedman and Captain Flagg. Allan Arbus and Edward Winter played off one another wonderfully. It’s a shame their characters never crossed paths again.

That said, Flagg doesn’t really do much other than act like Flagg. Likewise, Margaret and Frank are little more than plot points, getting outraged, demanding Colonel Potter do something about the blasphemous and cowardly patient masquerading as Jesus Christ, then calling in Flagg. Perhaps those involved felt the religious aspect of the episode needed to be balanced by something ridiculous.

Personally, as much as I enjoy Sidney and Flagg together, I wish Father Mulcahy had more of a role in the episode. We get a brief scene of him discussing theology with Captain Chandler and that’s about it. What does he think about Chandler calling himself Jesus?

Also, I have what may be a very unpopular opinion about the end of the episode: Radar asking Captain Chandler to bless his teddy bear is awkward bordering on painful to watch, not touching and meaningful. Larry Gelbart expressed regrets about introducing Radar’s teddy bear and I completely agree with him. In this scene in particular, the teddy bear doesn’t humanize Radar, it infantilizes him.

Why not have Radar ask Captain Chandler to bless one of his animals? That would serve the same purpose without making Radar seem immature and childish.

Klinger dressed up as Moses is hilarious. Too bad Hawkeye didn’t make a joke about Klinger only carrying one tablet with three of the Ten Commandments on it. 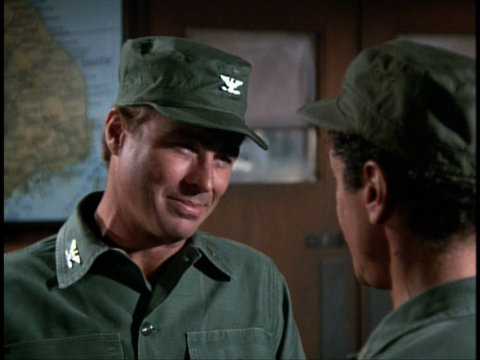 The phrase “Quo Vadis” is Latin for “Where are you going?”

When Sidney Freedman and Colonel Flagg meet, Flagg mentions the two played poker once. Most fans consider this a reference to the Season 2 episode “Deal Me Out” in which Sidney played poker with a Captain Halloran, played by Edward Winter and confirmation that Halloran was one of Flagg’s aliases. That fits within the context of the show but in reality, Halloran was Halloran–only later was the character of Colonel Flagg created.

Scriptwriter Burt Prelutsky credits this episode with reviving his career. He went on to write another seven episode of M*A*S*H, the last of which was “The Grim Reaper” in Season 6. Prelutsky was nominated for a Humanitas Prize for writing this episode but lost to Larry Gelbart and “The Interview.”

Radar gets a first name in this episode: Walter.