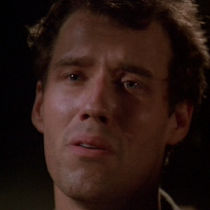 Actor Kevin Geer, who had a memorable guest role in “The Billfold Syndrome” during Season 7, died last month (January 25th) at the age of 64. Geer played Sgt. Jerry Nielson, a medic who comes down with amnesia. Sidney Freedman is called to help, leading to a climactic hypnosis scene. Geer’s performance is stunning.

According to the Internet Movie Database, “The Billfold Syndrome” was Geer’s first credited acting role. Additional TV and film roles followed. During his career, he made guest appearances on TV shows like The Waltons, MacGyver, China Beach, and three different shows in the Law & Order franchise. His most recent acting credit is a 2016 episode of Law & Order: Special Victims Unit. Geer’s films include The Pelican Brief, The Contender, American Gangster, and The Men Who Stare at Goats.

Geer is perhaps best known for his work on the stage. His Broadway debut came in a 1988 revival of A Streetcar Named Desire. He also appeared in Side Man and Twelve Angry Men. His Off-Broadway credits include Kid Champion, The Foreigner, and em>Medieval Play.

Obituaries can be found at Playbill.com and The New York Times.