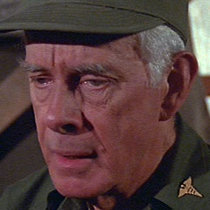 Capsule Summary: Colonel Potter lashes out after he starts doubting his surgical skills and calls Sidney Freedman for help. Meanwhile, Charles is sick of his dirty Swampmates and decides to turn the tables on them.

Last week, I reviewed an episode featuring Sidney Freedman (“Quo Vadis, Captain Chandler?” from Season 4) and today thanks to the random number generator I’m reviewing another episode featuring the 4077th’s favorite psychiatrist. “Pressure Points” was the second-to-last episode to guest star Allan Arbus. He returned for the series finale at the end of Season 11.

Like so many episodes of M*A*S*H, this one features a dramatic storyline and a comedic one. The A story in which Colonel Potter uses anger to mask his fear is clearly the dramatic storyline. That makes Charles turning into a slob the comedic B story. Both are enjoyable but neither are perfect.

The problem with the Colonel Potter story is the yelling. I don’t know if it was the writing, directing, or Harry Morgan’s acting choice but the yelling is just too much. Potter often got angry and often yelled and sometimes it worked and sometimes it didn’t. When he blows up at Captain Schnelker (“If they can invent better ways to kill each other, why can’t they invent a way to end this stupid war!?”) it definitely doesn’t work, at least in my opinion.

Perhaps there’s a scenario in which Potter’s reaction would’ve worked. The sentiment is fine. The emotion is fine. It’s the motivation that doesn’t ring true. Potter is upset because he missed some shrapnel so he completely blows his top? I don’t buy it. Then he does it again in the Mess Tent when he berates Hawkeye. Like I said, the yelling is too much.

Calling in Sidney makes sense. It’s believable that Potter wouldn’t want to talk to any of his subordinates about his fear. Too bad Sidney isn’t given more to do. He doesn’t really help Potter other than to serve as an impartial ear. The story Potter tells about falling in love with surgery after seeing his uncle operate on a colicky horse is touching. The emotion in Potter’s voice is genuine (“I’ve lived that wide-eyed little boy’s dream ever since.”) but also serves to reinforce how overblown the yelling feels.

The Charles B story is a good one and I love seeing Charles the slovenly slob, even if the whole thing is somewhat reminiscent of “The Smell of Music” from Season 6. In that episode, Hawkeye and B.J. get so annoyed by Charles and his French Horn that they stop bathing. In “Pressure Points,” Charles gets annoyed at how messy Hawkeye and B.J. are so he stops cleaning up.

The best part is how quickly and completely Charles transforms from meticulous neat freak to utter pig. He not only stops cleaning up after B.J. and Hawkeye–he stops cleaning entirely. He also stops shaving and makes a mess while eating. I wonder how much fun Alan Alda, Mike Farrell, and David Ogden Stiers had destroying the Swamp. Also, I feel so sorry for whoever had to clean everything up after production wrapped on this episode. 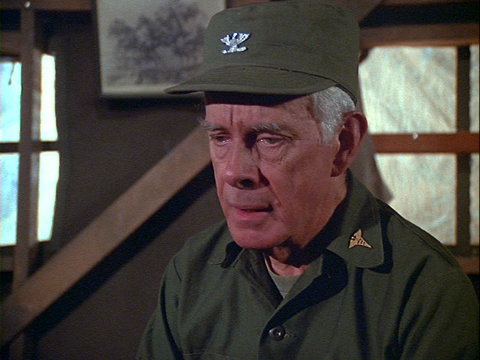 Is there any indication in earlier episodes that Charles actively cleans up after B.J. and Hawkeye? Off the top of my head, I can’t think of any.

Judging by the Christmas cards hanging next to Hawkeye’s bunk, this episode takes place around Christmas. It aired in February 1982.

I don’t know why I noticed this, but during Captain Schnelker’s presentation, Hawkeye is leaning against the wooden stand where Colonel Potter usually keeps his saddle. There’s no saddle to be seen. Later, when Klinger rushes in to inform Potter of the destruction of the Swamp, the saddle is back on the stand.