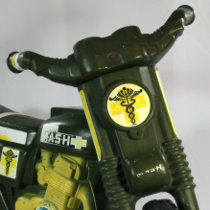 A few weeks ago I got an e-mail from David asking whether I knew anything about a M*A*S*H ride on motorcycle toy. I had no idea such a thing existed. All David knew was that the toy was apparently made by a company called SMC out of St. Paul, Minnesota.

I checked The Complete Book of M*A*S*H, which includes limited information on M*A*S*H collectibles and memorabilia, but found nothing. I eventually came across a listing for an August eBay listing for a M*A*S*H motorcycle toy.

From the eBay listing:

Super Rare MASH toy. Made in the 70s by SMC out of St Paul Minnesota. Limited to about 300 made as a promotional item. There hasn’t been one on ebay in years and may not be for a long time. I only no of one more besides this one. Has some wear and signs of play and use. Would have been big enough for a small child.

David actually believes the toy in the auction–which was ended by the seller with no sale–is the exact same toy he eventually acquired. He also thinks it was manufactured by a company called Empire because a nearly identical Batman motorcycle exists. David was kind enough to send along some very nice pictures of the toy (click on any of the images to see larger versions):

Does anybody know anything about this ride on toy? Was it a promotional item as the eBay listing suggests?