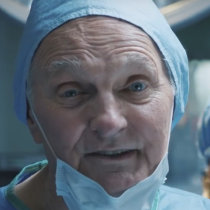 I don’t usually report “news” unless it relates directly to M*A*S*H but I thought I’d make an exception here because I think this is really neat. Alan Alda has joined four other TV doctors in a new ad campaign for Cigna health insurance advocating for annual checkups.

The commercials feature Alda, Patrick Dempsey (Grey’s Anatomy), Lisa Edelstein (House), Noah Wyle (ER), and Donald Faison (Scrubs). They started airing on September 8th. I’ve only seen one on TV myself but I’ve watched all of the commercials on YouTube.

Here are the three main commercials:


You can also find two shorter versions of the first commercial. Plus, there’s this behind-the-scenes video:

You can read more about the ad campaign at Ad Age. Also, People.com has an article in which Noah Wyle and Patrick Dempsey basically gush about how awesome Alan Alda is:

Dempsey said of also selecting M.A.S.H. as his TV pick: “There are only a handful of doctor shows that really have worked if you think about it. M.A.S.H. being one of them. That was the first that sort of tied in the drama, the sense of humor and then, later on, more social issues of that time where they were pushing it more towards the latter part of their run. So it would be nice to go back to that to be on that show certainly.”

What do you think? Are the commercials amusing? Have you seen any of them on TV?