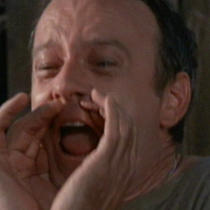 Capsule Summary: Sidney Friedman is depressed so he takes a vacation at the 4077th. Meanwhile, Hawkeye encounters a self-centered bomber pilot.

“Dear Sigmund” is the fifth episode of M*A*S*H to feature Allan Arbus as Sidney Freedman. For the most part it’s a relatively low-key episode but it’s a very good one. Sidney penning a letter to Sigmund Freud allows him to briefly discuss each character, offering snapshots of life at the 4077th over two weeks. It’s a familiar conceit for the series used uniquely here because it’s not from the point of view of a main character.

Sidney doesn’t play much of a role in the episode himself but we learn enough from the few scenes that actually focus from him. He’s frustrated with his job and clearly depressed after losing a patient. Somehow, visiting his friends at the 4077th is therapeutic and he leaves in better spirits. Although it’s probably not reasonable to believe Sidney could actually stick around the 4077th for two weeks, I’m willing to overlook that minor detail.

As is the case with all the “letter home” episodes, viewers must also be willing to believe that Sidney was either present for all of the events he writes about or heard about them in detail from someone else. He clearly wasn’t in post-op when Hawkeye was parading around in a tuxedo. Nor was he there for Klinger’s latest stunt or any of the practical jokes other than the one he participated in and the one pulled on him.

Unless I’m mistaken, Sidney comments on the personalities of everyone at the 4077th except for Frank. After their talk about Frank’s wife, Sidney does say “it’s a wonder more people don’t take a vacation from reality,” which sheds some light on his opinion of Frank Burns.

I really don’t like Hawkeye’s B story involving the above-it-all pilot Captain Hathaway. It’s heavy-handed, for one thing, but it also makes Hawkeye seem naive. Does he really think Hathaway doesn’t know that he’s killing people? Hathaway’s attitude may well be a coping mechanism, the only way he can stay sane in an insane war. Hawkeye even alludes to his, telling Hathaway’s he’s “Too decent to think that this can be anything like a clean war.”

What’s worse, it’s not like Hathaway can stop being a bomber pilot. Now that he’s seen a wounded little girl in surgery–a girl whose village he may have inadvertently bombed–he has to go back up in the air and keep dropping bombs. He has a job to do. Before he could pretend he was just flying through open sky, drop his load, and return to Tokyo without agonizing about his role in the war. Hawkeye hasn’t helped Hathaway. All he’s done is make one pilot miserable.

Perhaps this would’ve worked better as the A story in another episode rather than a minor B story. The story line would benefit greatly from Hawkeye realizing that maybe Hathaway isn’t as cavalier as he seems and maybe even apologizing for forcing the pilot to come face to face with the consequences of simply doing his duty.

I’m not sure whether the overturned ambulance constitutes a C story or not. Sidney is involved and vaguely references in his letter–in connection with Father Mulcahy–but it’s a large part of the episode. I love the scene in which Colonel Potter yells at Radar about O’Donnell only to learn the man he’s furious at has died. The letter Radar writes to O’Donnell’s parents is touching, although I don’t believe for a second that a man like Potter would let someone else write letters like that. 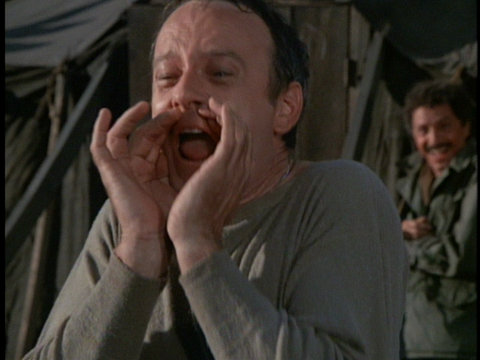 Sal Viscuso, credited as Patient John (the soldier who initially doesn’t want to go back in an ambulance), made a total of three guest appearances on M*A*S*H but he’s much better known for being one of the uncredited P.A. announcers.

“Dear Sigmund” is one of just two M*A*S*H episodes to feature subtitles on screen. The other is “Communication Breakdown” in Season 10.

I don’t know about anyone else, but if I were recuperating at the 4077th and one of the doctors performed rounds wearing a tuxedo and flippers on his feet, I would be concerned.

The tag scene runs just 20 seconds, making it perhaps the shortest tag ever seen on M*A*S*H.