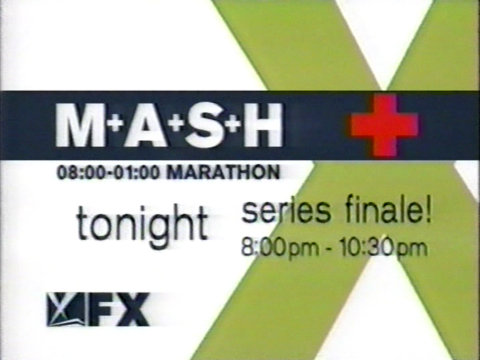 Here’s a promotional spot for the “0800-0100 M*A*S*H Marathon” on FX, which aired on Sunday, September 23rd, 2001. I don’t have a full schedule for the marathon but I do know it included “Welcome to Korea” (split into two episodes for syndication), “Change of Command,” and “Goodbye, Farewell and Amen.”

The day after this marathon aired, FX revamped its evening schedule with the addition of dramas Buffy, the Vampire Slayer, Ally McBeal, and The Practice from 7-10PM. If I recall correctly, one of these shows replaced M*A*S*H (the series continued airing during the day) but within a few months M*A*S*H was brought back due to low ratings for either Ally McBeal or The Practice.

This promo was originally included in my M*A*S*H In Syndication article but I’ve moved it here to the blog where it will hopefully be seen by more people. I recently went through a VHS tape with seven or eight episodes of M*A*S*H from FX airings and found a few other promos dating back to 1999. Look for them in the coming weeks.