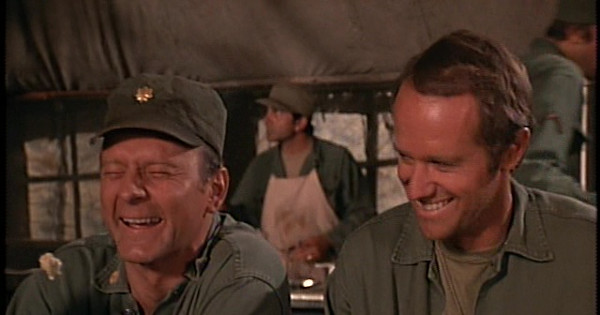 Capsule Summary: Margaret calls from Tokyo with great big news but refuses to tell anyone what is until she’s back at the 4077th: she’s engaged. Frank reacts badly to the news.

This episode brought some big changes to M*A*S*H. Margaret and Frank’s on-again, off-again relationship was off for good once she got engaged to Donald Penobscott. It wasn’t just their physical relationship that was over. No longer would the two team up against Hawkeye and B.J. or be the butt of their jokes. More importantly, the engagement really began her the transition from Hot Lips to Margaret, which was hinted at as far back as “Hot Lips and Empty Arms” during Season 2.

I wish there was a little more tension at the start of the episode as those back at the 4077th wondered what it was Margaret had to tell them. B.J. hopes for news about peace talks while Frank thinks he’s getting a promotion. But there’s no real sense of urgency for her to return, no worry about what she may have to say. Perhaps that’s because she was drunk when she called.

Larry Linville does a superb job in this episode. There are so many wonderful scenes: Frank congratulating Margaret on her engagement and tearing down the mess tent doors; Frank telling Radar he did a good job and then offering him a job; Frank pulling the grenade pin out with his teeth and struggling to put it back in; Frank on the phone with his mommy.

I wish Frank hadn’t fallen to pieces in Margaret’s tent, because he’s just too pathetic cowering on her bed after she hits him. That scene wasn’t necessary. We know Frank lusted after Margaret. We know he was obsessed with her. It did include the following exchange, which is both hilarious and insightful:

Margaret: “Let me go! I’m an engaged person!”
Frank: “Now we can cheat together!”

Frank talking on the phone with his mother is likewise insightful but also painful:

Oh, I’m fine, Mom. No, I’m not. Well, nobody likes me here, you know, as usual. I don’t want to talk about it. Well, you see, I had this friend and this friend, um, well, just pretended to like me, you know? The way Dad used to.

He then starts crying, although thankfully we don’t see it on screen. Exhausted, he falls asleep and is carried back to the Swamp by Hawkeye and B.J.

Margaret is oblivious throughout the episode, first at the tepid reaction to her engagement and later at how she’s hurting Frank by constantly talking about Donald. When Hawkeye calls her on it, she reveals her true feelings about Frank. Frank gets the last laugh, though, with a dig at her age.

Permanently splitting up Margaret and Frank meant everyone at the 4077th was now united in their dislike of Frank. Margaret was his only ally, his only confidante, and his only friend. He became an increasingly pathetic character. It’s no wonder Larry Linville decided to leave the series after Season 5.

Frank eventually does his get promotion to Lieutenant Colonel, as revealed in “Fade Out, Fade In” at the start of Season 6.