Capsule Summary: Margaret’s divorce is finalized so she decides to rededicate herself to a life in the army. Meanwhile, Radar tries to impress a pretty new nurse.

The evolution of Margaret Houlihan continued in this episode’s A-story, following other key episodes for the character like “Hot Lips and Empty Arms,” “The Nurses” and “Hot Lips Is Back In Town.” Here we see her received notice that her marriage to Donald Penobscott has come to an end. Her divorce has been finalized.

The scene in the mess tent when she gets the news plays well due to the obvious confusion on the part of Charles about whether to congratulate Margaret or express their condolences. Radar didn’t seem to have the same problem, offering his apologies for interrupting her celebration. That Margaret would turn to the army after reevaluating her life fit the character, as did her rushing into a big project without giving it much thought.

Fitting, too, was the unfortunate fact that General Weiskopf misinterpreted her invitation to the 4077th to observe her new nurse triage program. After all, the two obviously had a relationship at some point and for all we know Margaret used that to convince him to travel to the 4077th (either consciously or subconsciously). Over the years Margaret was depicted as someone who didn’t have a problem sleeping with colonels and generals, even if doing so didn’t seem to get her anywhere. 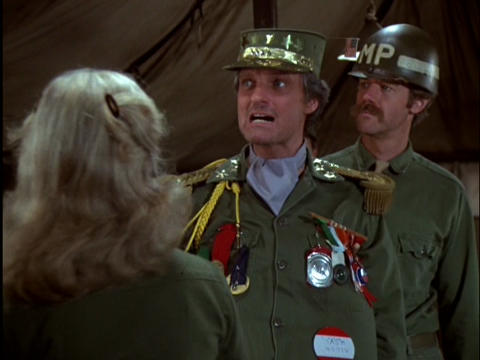 In that respect, “Hot Lips is Back in Town” is a big step forward for Margaret not because her divorce forced her to reevaluate her life but because that reevaluation meant coming to terms with her past. She could have gone with Weiskopf and been promoted and maybe eventually improved nursing in Korea. But it wouldn’t have been because of her talent and expertise. I’m not sure Hot Lips would have actually taken Weiskopf up on his offer but Margaret wouldn’t even entertain the possibility.

The B-story involving Radar attempting to woo Nurse Nugent was tired and repetitive. All that stands out was his conversation with Charles about how to approach girls.

Hawkeye and B.J.’s General Dumbkopf and Cato routine was some old-school M*A*S*H tomfoolery. Where did B.J. find a party horn/noisemaker that sounded like chirping birds?

Did you notice the hair style Nurse Bigelow (Enid Kent) was sporting in this episode? I wonder if 1950s era military regulations allowed women to wear their hair short.

22 Replies to “Episode Spotlight: Hot Lips is Back in Town”