Back in 2008, Peter Kurch wrote a wonderful analysis of the 1982 Tristar line of M*A*S*H collectibles (action figures, vehicles and a huge playset). But Tristar wasn’t the first company to release M*A*S*H action figures. That distinction falls to Durham Industries Inc., which released a pair of roughly 9″ figures in 1975. The two figures were obviously meant to represent Hawkeye and Hot Lips but there were no names mentioned on the packaging. However, black and white photographs from the series, focusing heavily of Alan Alda and Loretta Swit, make it clear who these figures are supposed to be. 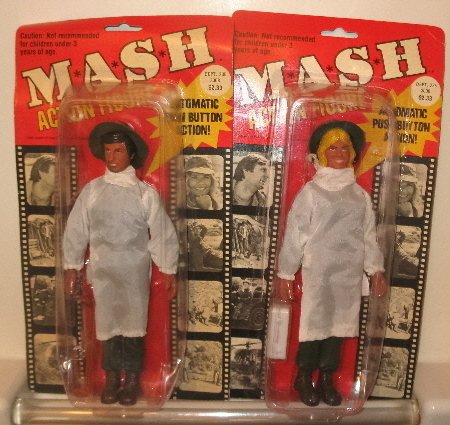 From what I’ve seen, the sculpting on the faces is quite well done. The likenesses to Alda and Swit isn’t terrific but the paint is applied nicely, especially the white around the eyes and on the teeth. The hair on Hot Lips is a very bright shade of yellow and her eyes are bright blue. I’ve never seen a Hawkeye figure up close so I can’t say what color his eyes are but his hair appears to be dark brown. Both figures are seemingly solid plastic painted to look like olive drab green Army uniforms, complete with brown boots. Included are white cloth surgical gowns and green plastic hats. The Hawkeye figure comes with a golf club (or potentially two) while the Hot Lips figure has a white suitcase emblazoned with the Red Cross logo.

As far as I can tell the figures have very limited articulation, with shoulder and hip joints that allow the arms and legs to move. The elbows and knees do not bed and I don’t even think the neck swivels. The right hand is molded to allow the figures to hold their accessories: Hawkeye can hold his golf club and Hot Lips her suitcase. The figures feature “Automatic Push Button Action!” that, as the phrase suggests, involves a push button on the back of the figure. Pushing the button swings the right arm up, taking either the golf club or the suitcase with it. 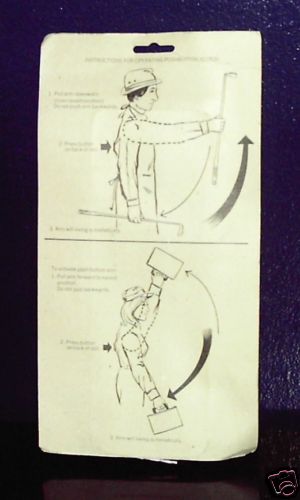 Back of Durham Hot Lips Action Figure, Circa 1975

For some reason, the Hot Lips figure seems to be easier to find than the Hawkeye figure. Finding either character mint on card (MOC), meaning the plastic bubble is still firmly attached to the cardboard, can be tough. It seems the glue holding the bubble to the cardboard hasn’t aged well. I’ve seen some figures for sale with a note explaining that the push button action no longer works or does not work well. I’ve also seen figures where the right arm has fallen off, suggesting that the mechanism allowing the arm to move can break or snap off due to wear and tear. Other issues to look out for are paint that has chipped or dulled and missing clothing and/or accessories. If you’re interested in finding these figures, I’ve seen prices ranging from under $10 for a loose figure to more than $30 for a pair of MOC figures and anything in between. 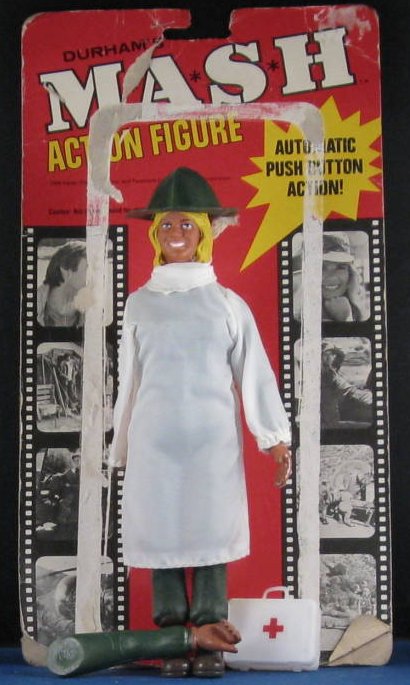 Although only these two action figures were produced Durham’s line of M*A*S*H toys included two other toys. Check back tomorrow to learn more.