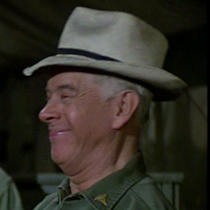 Capsule Summary: Everyone at the 4077th is working hard so Colonel Potter schedules a movie as a special treat. When the projector keeps breaking down, the camp must provide its own entertainment.

“Movie Tonight” is widely regarded as a classic episode of M*A*S*H, although there may be some fans who don’t like how silly it is. Personally, I’ve always loved it even though I recognize how unlikely it is that so many people could so quickly come up with such brilliant song lyrics on the spot. I’m more than willing to suspend my disbelief.

There’s a plot to this episode but it’s a thin one. Although not mentioned, there must be a lull in the fighting if the staff feel comfortable taking the time to clean the OR from top to bottom. All that work has everyone bickering and fighting. Fortunately, Father Mulcahy manages to track down the mail and with it a copy of Colonel Potter’s favorite movie: My Darling Clementine.

At first, the movie doesn’t draw much of a reaction. The nurses are more excited about an I-Corps dinner where they’ll get to see new people. Frank invites Margaret to sit with him but takes things too far when he suggests after the movie the two play “war games” like they used to. He then makes fun of Donald Penobscott’s last name, which is kind of funny. He later takes out his frustration on Radar, berating him for not finishing his peas. Even Hawkeye and B.J. seem a bit snippy.

Once the movie starts, however, the whole camp gets into it. So of course the projector fails. Poor Klinger is bombarded with popcorn and catcalls as he tries to fix it. Colonel Potter attempts to keep the jocular mood intact by ordering everyone to sing “Tennessee Waltz,” which they do.

The highlight of the episode is the camp singing “Gee Ma, I Wanna Go Home” when the projector fails again. Father Mulcahy kicks things off with a verse about being a chaplain in the Army. Hawkeye and B.J. follow with a verse that fits Hawkeye more than B.J. Colonel Potter sings about his horse, the nurses sing about choppers, Radar sings the praises of corporals, Klinger sings about wearing dresses, and Margaret sings about getting married.

Later, after a few of Radar’s impersonations, Frank jumps up and starts singing his own morbid verse about stabbing Hawkeye and B.J. in the heart. If you go back and watch Frank closely while everyone else is singing “Gee Ma, I Wanna Go Home” you’ll notice he doesn’t seem very enthused, particularly after Margaret’s verse.

The Father Mulcahy Soundalike Contest is hilarious. I think Radar does the best impersonation. Frank sounds like Minnie Mouse. Everyone is having so much fun the nurses would rather stay at the 4077th than go to their I-Corps dinner. Margaret’s performance of “C’est Magnifique” is, I think, intentionally longer than it needs to be. To the untrained ear, Loretta Swit sounds like she has a good set of pipes.

As the episode comes to a close, the movie reaches its climax. A massive shootout on screen has everyone in the Mess Tent pretending to be a cowboy. Margaret mows down Hawkeye before being shot herself. Frank is either shot in the throat or chokes on popcorn. Radar enthusiastically blasts away with a six-shooter. It seems bizarre that these doctors and nurses who see so much death would get so much enjoyment out of pretending to kill one another and play dead.

That’s exactly what the writers were going for, of course. The 4077th deals with death on a daily basis. They would never make light of killing and dying but watching a violent movie and playacting allows them to blow off some steam. When actual wounded arrive moments later, they all jump up and head to surgery, the fun over.

The episode ends with one final song, a somber rendition of “My Darling Clementine” sung softly by the doctors and nurses as they try to save lives. It’s a moving ending to an otherwise jocular episode that borders on the absurd at times. In my opinion, it deserves to be called one of the classics of M*A*S*H. 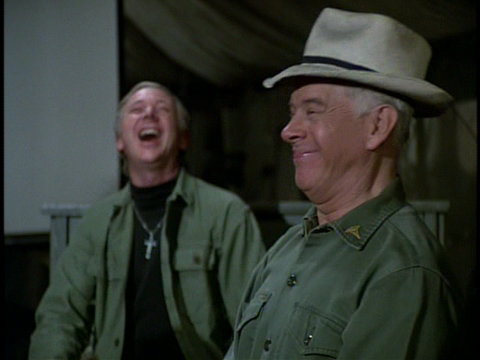 There have to be so many great stories about the making of this episode. Did the cast enjoy filming this episode? Was anyone apprehensive about having to sing? I’m especially curious about how the script was written. Gene Reynolds, Don Reo, Allan Katz, and Jay Folb are credited with writing the episode. That’s an unusual number of writers. Reynolds, of course, was executive producer of M*A*S*H during Season 5. Reo and Katz were producers. Folb served as story consultant.

Did the four work together to write the lyrics for the 4077th’s version of “Gee Ma, I Wanna Go Home” or was one person responsible? The music cue sheet for the episode offers no insight. I wonder if any verses were written but not used–what would Igor have sun about, I wonder–or perhaps alternate versions drafted but later discarded.

Enid Kent and Judy Farrell are credited as Bigelow and Able in this episode. The two have brief exchange with Margaret while cleaning surgical packs:

Margaret: “Oh, can it nurses! Check the surgical packs.”
Able: “Checking, checking.”
Bigelow: “Checking packs like crazy.”
Margaret: “Put a lid on it!”

The other two nurses are uncredited but one is Gwen Farrell.

Radar’s imitation of John Wayne from McLintock! is an infamous example of an anachronism on M*A*S*H. The movie was released in November 1963, more than a decade after the end of the Korean War.

When Margaret is singing “C’est Magnifique” and Klinger gets the projector working again, her shadow can be seen on the movie screen.