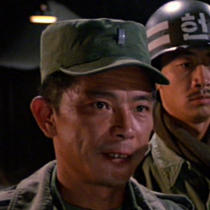 Capsule Summary: Hawkeye and B.J. face off against an ROK officer eager to interrogate his wounded prisoner, a woman accused of being an enemy guerilla. Meanwhile, Margaret worries when a wounded Scully shows up at the 4077th.

I can’t decide how I feel about this episode. Specifically, the A story involving Hawkeye, B.J., and Lt. Park. This is a rare episode in which the good guys at the 4077th don’t win in the end. Hawkeye and B.J. rant and rave and try their best to outmaneuver or trick Lt. Park but utterly and completely fail.

Mako, in his third of four guest appearances on M*A*S*H, does a wonderful job playing Lt. Park. Personally, as a viewer, I’m left asking myself whether he’s as cold and calculating as Hawkeye and B.J. think or if he’s simply a soldier doing his duty for his country. Is he salivating at the thought of brutally torturing and killing his prisoner? Or does he truly think she has information that will save lives?

Clearly, Lt. Park has a very different understanding of war than Hawkeye, B.J. and the others. Consider his chess analogy:

Lt. Park: “You’re a doctor. Your concern for an individual life is admirable but impractical. War, gentlemen, is like chess. Loss of a single pawn is insignificant. All that matters is winning the game.”

How is his attitude any different than those expressed by Colonel Buzz Brighton in “The Ringbanger” (Season 1) or General Collins in “Say No More” (Season 11)? War is hell. People die. If Lt. Park can get information from his prisoner, perhaps he can keep some people from dying. If that means torturing and killing her, apparently he can live with that.

Colonel Potter may understand this but not like it. Certainty, he realizes his hands are tied and there’s nothing he can do. Lt. Park is going to get his prisoner eventually. How Charles truly feels isn’t addressed. He refers to Lt. park as a “professional soldier” just “doing his job” but seems too busy devising chess moves to care about what’s going on.

Hawkeye and B.J. are blinded by their commitment to saving lives, regardless of which side of the war those lives are on. They don’t see the woman as a prisoner or a possible guerilla or an innocent–they see her as someone who needs healing. They heal. That’s what they do. Full stop.

What makes this episode interesting is that we, the viewers, know that the woman is a guerilla because we see her pulling an IV out of a wounded soldier in Post Op. She’s trying to kill him. Hawkeye and B.J. don’t know that. Margaret didn’t see it happen and assumes the woman was looking for help. B.J. thinks she was trying to escape Lt. Park. They don’t consider the possibility she was trying to kill someone.

The final showdown between Hawkeye and Lt. Park is dramatic. I think it suffers because it takes place in the studio rather than outside, and thus feels cramped. As the woman yells in Korean, and Lt. Park translates, Hawkeye and B.J. look stunned. Do they finally believe the woman is a guerilla, a killer? If so, it doesn’t change how they feel. They still hate letting Lt. Park drive away with the woman, knowing she’ll likely be tortured and perhaps killed.

Ultimately, I don’t feel this is a perfect storyline but it raises questions and makes me think, and that’s always a good thing.

I definitely don’t like the B story in which Charles acts so childish while playing chess with Lt. Park. As my appreciation has grown over the years for the character of Charles and the fine work of David Ogden Stiers, scenes like this one bug me more and more. It’s not that I have a problem seeing Charles taken down a peg or two. It just somehow feels out of character to see him behave like a sore loser. I’d much prefer to see him shocked and appalled at being outplayed by Lt. Park.

The Margaret-Scully C story is filler and goes nowhere. Scully is wounded, arrives at the 4077th, Margaret worries about him, Scully tries to get something going in Post Op, and then Scully leaves. It’s too bad there wasn’t time to develop more of a true storyline here.

Likewise, Radar’s minor role adds nothing to the episode. In fact, without it, there may have been time to devote to Margaret and Scully. 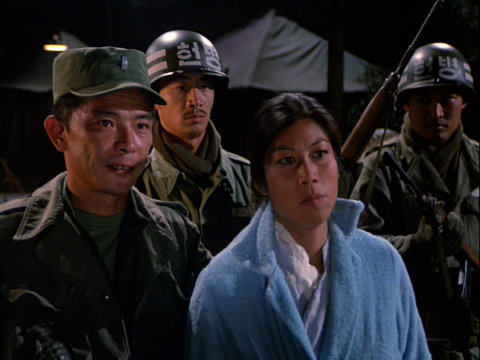 Lt. Park and his prisoner.

Any ideas why this episode is called “Guerilla My Dreams”? Am I missing something obvious? There are no dreams involved. Is it supposed to be a play on the phrase “girl of my dreams”? If so, why?

Some of the camera work in this episode is unusual. Particularly the shot of Hawkeye, B.J., Colonel Potter, and Charles talking to Lt. Park while walking from Potter’s tent to the Mess Tent. The group walks toward the camera, which is located inside the Mess Tent. You can see the mesh netting when the camera pulls back as they walk inside. Earlier in the episode, during triage when Margaret talks to Scully, the same mesh netting is noticeable.

According to several websites, including the Internet Movie Database, this episode marked either the first time or one of the first times someone said “son of a bitch” on network television in the United States. This is one of those claims that’s difficult, if not impossible, to confirm.

I’ve never noticed this before, which may be because it’s unique to this episode, but the sleeves of B.J.’s jacket are too long for him.