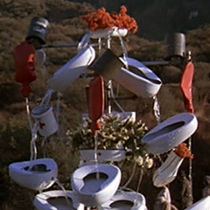 Capsule Summary: The first anniversary of peace talks enrages Hawkeye so he decides to write a letter to President Truman, telling the President all about what’s going on at the 4077th.

This is a busy episode, with two primary storylines and several other story points thrown in for good measure. Everything ties into Hawkeye’s letter to Harry Truman. It’s classic Hawkeye, needing an outlet to relieve his anger and frustration.

He tells the President about everything going on at the 4077th, from venereal disease to moonshine to a young Korean boy who wants an eye operation so he’ll look more like an American. And he shares how the 4077th got its new hot water heater by participating in a camp beautification project.

Colonel Ditka is just the latest in a long line of buffoonish military personnel. He doesn’t seem to care much about medicine or saving lives. “See, you don’t notice it because you’re here every day but to a visiting dignitary this place looks terrible.” Ditka is just following orders, of course.

The plot point about Kim Han’s desire to have an eye operation makes me a little uncomfortable. I’m not sure if that’s because it’s sad to think that a young South Korean boy wants to change his appearance or because the line “Koreans are little squirts, Americans are real tough” is so corny. It’s a serious issue and I don’t feel this episode addresses it well. Perhaps with a little more time to flesh out Kim Han, it would’ve worked better.

That said, I do like how Kim Han gives B.J. the opportunity to get enraged. Hawkeye fumes about the peace talks but B.J. doesn’t like to get upset about things he can’t do anything about. He can do something Kim Han and he does, getting Margaret to talk to him. Hopefully, she gave him some confidence. How do you think Hawkeye would react to Kim Han asking for an eye operation? 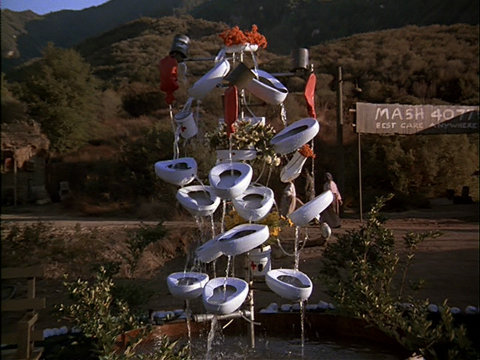 There’s a big continuity issue in this episode. Hawkeye finishes his letter, signs and seals it, then asks Nurse Kellye to get it mailed. Yet we then see him writing in the Swamp. Perhaps Hawkeye started a second letter to President Truman.

As I always do when a character is shown writing a letter, I wish I knew what Alan Alda was actually writing on the pad of paper. Gibberish that looks like writing? Script ideas?

Most of the shots of the beautification project were filmed outside and mountains ca be seen behind the fountain. Notice during the tag scene, however, the fountain is clearly on the Stage 9 soundstage indoors in front of the Officers’ Club.

The soldier working on the beautification project who calls Klinger “skyscraper nose” doesn’t receive a credit despite having several lines. I wonder, was Jeff Maxwell unavailable for this episode? We do see Goldman. Another soldier, the one who’s interested in the Korean working girls, is also uncredited. He has a single line.