Yesterday I wrote about the two M*A*S*H action figures released by Durham Industries Inc. in 1975. Today I’ll tackle the remainder of Durham’s M*A*S*H toy line: a helicopter and a motorcycle, both also released in 1975. Or at least these are the only other additional toys I’m aware of. But until recently I didn’t know the motorcycle existed. First up is the 6″ long M*A*S*H Copter, which looks nothing like the helicopters used in the series. 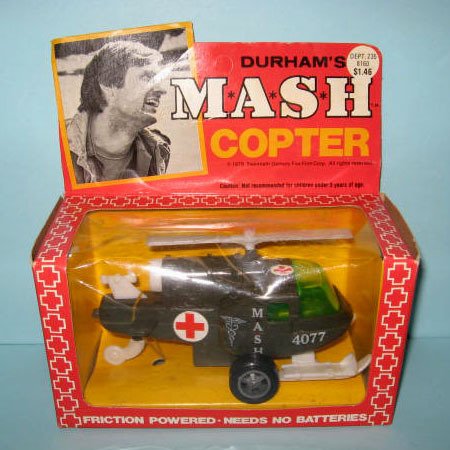 As the box advertises, the toy is friction powered and needs no batteries. Grasping the white plastic piece on the bottom of the copter’s tail and squeezing it makes the propeller twirl. At least that’s my best guess at what the toy does. The white “ski” at the front is likely only included to keep the copter level when on the ground. I assume the wheels also spin but it doesn’t look like the green plastic windshield opens. There’s also what looks like a white knob on the back of the toy that may or may not do something. The copter was sold boxed/carded, safely secured by wires behind a plastic bubble. A black and white picture of Alan Alda as Hawkeye adorns the card. One of these copters sold for $38 on eBay in December of 2009 (from Australia of all places).

This next toy was a complete mystery to me when I stumbled upon it on eBay last month. It’s called a Freewheeler Cycle and Rider and comes in an open package with no plastic bubble to protect the toy. A hole on the back of the box suggests that the toy was once wired to the box to keep it from moving around. The rider is obviously supposed to be Hawkeye and can be removed from the cycle (although whether it is supposed to come off is another question). A sticker on the back of the cycle, perhaps intended as a sort of license plate, says M*A*S*H 4077. 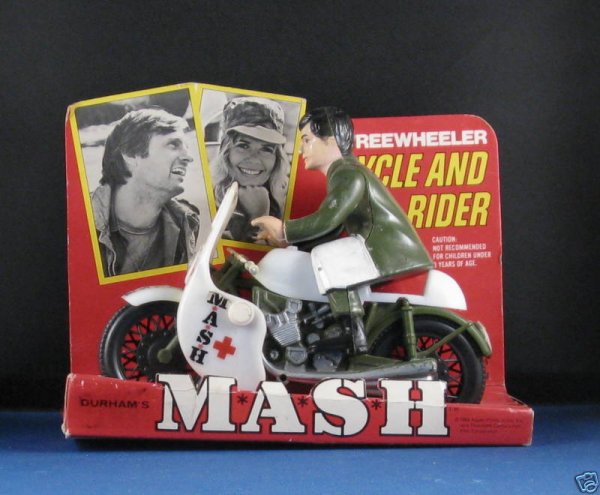 I don’t know exactly what the cycle does. The back wheel seems to be quite a bit thicker than the front wheel, which might allow it to stand upright on the ground. Does the cycle move if pulled back? Or is it human powered? If anyone has information about the cycle (or the copter) please let me know. The only cycle I have seen sold for $23 on eBay last month, but the auction also included a Durham Hot Lips action figure.

One Reply to “Durham M*A*S*H Helicopter and Motorcycle, Circa 1975”