My post about the death of Pernell Roberts earlier this week led to an interesting conversation in the comments. During the first episode of Trapper John, M.D. there is a scene in which a series of black and white photographs are shown on the office wall of Dr. John McIntyre, M.D. One of these photographs appears to depict Wayne Rogers and Alan Alda in front of the Swamp from M*A*S*H. Here’s the photograph in question, taken from a YouTube video (you can find it easily enough): 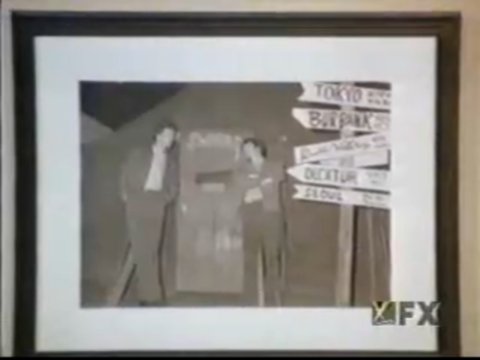 PinkPagoda had this to say about the photograph:

The scene with the picture is on you tube – and it is obvious that the two people in the picture are supposed to be the Hawk and the Trap that we all know and love from the television show (check out the hair) – however I don’t see the symbol on the SWAMP door, the sign post seems to be relocated, and the Trapper figure is MUCH taller than the Hawkeye figure. I don’t think Wayne Rogers is notably taller than Alan Alda, is he? It must have been made for the television show – and not an actual shot. Check it out for yourself on you tube, search for “Trapper John MD first episode” and the picture comes up after the guy on the stretcher is loaded into a helicopter at the hospital. What do YOU think?

In my opinion, the man on the left is obviously Wayne Rogers. But is the man on the right Alan Alda or someone else? I don’t know. The image is blurry, due to the fact that it comes from a YouTube video likely taken from a VHS tape that may or may not be a decade old. It sort of looks like the man has a beard. Or maybe just a shadow near his chin. As for the difference in height, the man on the right could be leaning his head against the door. I’m guessing the photograph was taken on the Stage 9 set at the 20th Century Fox Studios in Hollywood rather than the Fox Ranch (now the Malibu Creek State Park). I also don’t see the symbol on the door to the Swamp but it very well could be there. 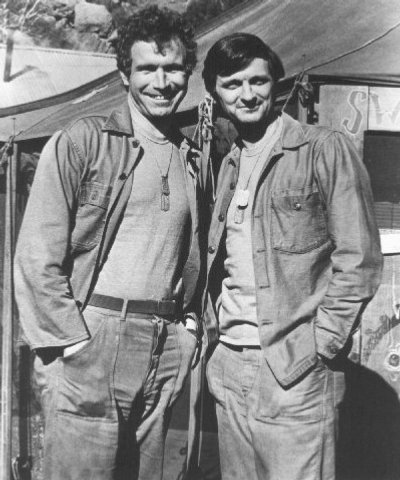 Notice that Alan Alda is quite a few inches shorter than Wayne Rogers. Hit the comments with your thoughts on this mysterious Trapper John, M.D. photograph.