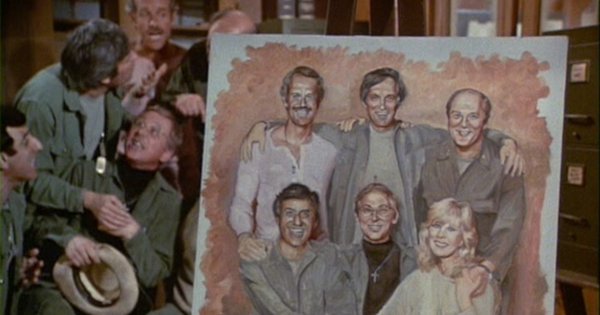 One of Colonel Potter’s paintings from M*A*S*H sold at auction last month for over $16,000. Potter painted a group portrait during the Season 10 episode “Picture This” featuring B.J., Hawkeye, Charles, Klinger, Father Mulcahy, and Margaret.

According to the item description, two paintings were created for the episode “by an unknown studio artisan hired by the show’s propmaster.” Producer John Rappaport took one home with him and kept it for decades before consigning it to Heritage Auctions. The company offered it for auction as part of its Entertainment & Music Memorabilia Signature Auction in Dallas, TX on November 3rd. A total of 16 bids were placed, with the winning bid of $16,250 (including buyer’s premium) going to an Internet bidder.

M*A*S*H Screen Used Cast Painting from “Picture This” (20th Century Fox, 1982). Rendered in acrylic on canvas by an unknown studio artisan hired by the show’s propmaster, this painting depicts most of the entire cast, and was used on screen as one of “Potter’s paintings” in the season 10 episode, “Picture This.” According to the accompanying note from series producer/head writer John Rappaport, only two of these paintings were produced for the episode. This one was taken home by the producer after the episode wrapped, where it hung in his home office for years. The whereabouts of the other painting is unknown. Measures approximately 22″ x 28″, the piece is in Fine condition. COA from John Rappaport.

Be sure to check out the high resolution photograph or scan of the painting, which allows you to zoom in and see every brush stroke.